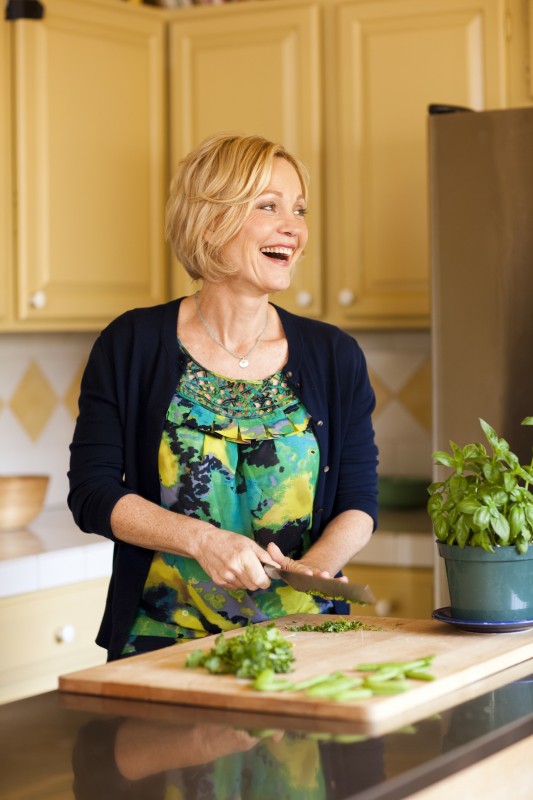 Going vegan “changed my life and changed the course of my life,” says Ann Gentry. “I couldn’t see it then. I just thought I was changing my diet.”

You may know Gentry as the founder of vegan mecca Real Food Daily, you may know her through her new cookbook Vegan Family Meals, but she started out as an actress — the starving kind. This only sounds romantic. In real life, it’s a drag. So Gentry learned to cook.

“It was horrible in the beginning,” she recalls. “I didn’t have a clue about food.”

She figured it out. “I gave up animal products, I gave up sugar. I stumbled upon macrobiotics. I learned about complex and simple carbs and what their differences really mean. I started to feel much better.” So much better, that in time, she swapped film for food. In 1993, Gentry, who had no business skills or restaurant experience, opened Real Food Daily, Hollywood’s first upscale vegan restaurant “back when vegan was a dirty word.”

Going vegan “changed my life and changed the course of my life,” says Ann Gentry Click To Tweet

From the beginning, Gentry had a different vision of what a vegan restaurant should be. The Santa Monica landmark is sleek and airy, not brown and boring. The food isn’t brown and boring, either, but vibrant with color and flavor, and deeply comforting. From pinto burritos to veggie chopped salad, Real Food Daily’s menu makes good on its promise — it’s plant-based, yes, but first and foremost, it’s real food.

That’s what Vegan Family Meals offers, too, with recipes straight from Gentry’s experience and kitchen. She’s one of vegan dining’s forerunners, but she’s also the mother of a twelve-year-old daughter and an eight-year-old son. Dinner at home is meatless and fuss-free.

“I just stick to what I know,” she says. “I’m going to put quality, healthy vegetable and grain dishes on the plate.”

Wanting to eat more meatless meals as a family? “You can make the changes together,” says Gentry. “But it’s got to start with the parents. You can’t think your kids are going to eat healthy on their own — they’re not. They’re looking to you for guidance and direction. Get on board. Get a vegetarian cookbook — mine, or there are thousands of others… Take them to restaurants that offer vegetarian choices. That’s where Real Food Daily is so great; you can go there and not feeling intimidated.”

That easy, open attitude has kept Real Food Daily going over the years. It’s a favorite among Hollywood’s plant-based faithful including Ellen DeGeneres, Alicia Silverstone and Glee babe Lea Michele— but you don’t have to be a star to eat here. You don’t even have to be meatless. “Looking at a busy dining room, most of the people aren’t vegetarian,” she says. “Are they going to be vegetarian and vegan? Probably not. They’re just looking for good quality food.”

And yet, it can be hard to find. “How our food is grown, what’s happening in the big industrial food complex — people don’t think about that when they eat,” says Gentry. “From my decades of experience, most people aren’t going to become vegetarian and vegan.” Does it make her want to leave the restaurant biz and try show biz? Not at all. She sees celebs galore all the time. They come to her restaurant.

“This touches people in a deep, profound way. People want this food.” And Gentry wants to keep serving it. “I believe in this cuisine, am still excited by it. It’s pleasurable, it’s fun, it’s creative. My job is to show this can be done where you are satisfied on every level.” 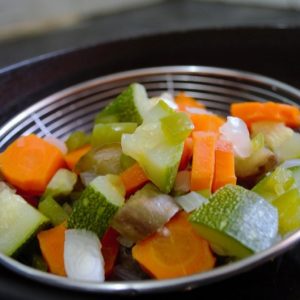 From Ann Gentry’s Vegan Family Meals/Andrews McMeel Publishing Don’t let the title fool you: It’s important to cook each vegetable separately in boiling water just long enough to reach their peak tenderness and flavor. I’ve chosen my favorite vegetables; feel free to incorporate any combination of seasonal vegetables that you especially like. The quick and easy dressing adds a depth of flavor and color; it incorporates umeboshi,* which can’t be topped for its clean, light, and refreshing flavor. I prefer to make this dressing with the umeboshi paste; however, you can substitute umeboshi vinegar for the paste and water. Simply sprinkle with vinegar to taste.
Print Recipe Pin Recipe