You are here: Home / MAIN COURSE / KAMUT with Lemon and Mint

Bob Quinn, the Johnny Appleseed of KAMUT, has brought passion and commitment not just to growing this ancient grain but to the ancient practice of organic farming and land stewardship. He’s just come out with a book about his experience called Grain by Grain: A Quest to Revive Ancient Wheat, Rural Jobs, and Healthy Food.

Thanks to reader interest in Meatless Monday’s farmer profiles, today launches Who Grows Our Food. This occasional Meatless Monday series takes a close look at some of the people, so often unsung, who give us the food on our plates. 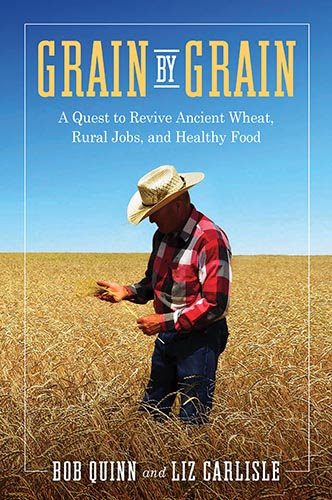 Winner of 2010’s Organic Leadership Award, Bob Quinn is passionate about proving the connection between what we eat and how we feel. He’s also passionate about growing khorasan wheat, better known (but still largely unknown) as KAMUT® wheat.

KAMUT is an ancient grain — yes, another one, but one that hasn’t gotten the buzz it deserves. With kernels twice as large as modern wheat, KAMUT contains a third more protein and a greater amount of antioxidants. What’s more, the International Food Allergy Association study concludes gluten-sensitive souls, that ever-growing number, can tolerate KAMUT better than modern wheat.

KAMUT kernels look like rice on hi-def and cook up fabulously chewy. Flaked, KAMUT is like oatmeal on steroids. KAMUT pasta cooks quickly and tastes mild (no sodden cardboard quality). KAMUT flour can be used for everything from quickbreads to Quinn’s favorite, KAMUT sourdough pancakes.

Since it was first grown in the Fertile Crescent, wheat was “what we considered the staff of life, the basic sources of energy,” says Quinn of KAMUT International. It’s how we’ve sustained ourselves as a civilization. Then a century ago, things changed. “The entire focus was on higher yields, so you can make cheaper bread and higher loaf volume, increase the volume and decrease the cost for the end user.” We got cheap, filling, fluffy bread, all right, but it came with hidden costs. It hasn’t nourished the soil that produced it and it hasn’t nourished us, either.

“Nobody likes to think they’re growing something that’s not healthy. They don’t like to hear that,” says Quinn, who has a doctorate in plant biochemistry. “But it’s alarming. I’m hearing all the time about the amount of food we have in this country, but look at all of the malnutrition, poor health.”

A fourth generation farmer who comes from a family who raised cattle and grew wheat the traditional — that is to say commercial — way, Quinn saw the organic light in the ‘70s when he was a grad student. Trademarking KAMUT (the name comes from an Egyptian hieroglyph) has been his way of guaranteeing in these days of GMOS and chemical-intense commercial farming, what you’re getting is ancient, authentic and organic.

“Organic is important to me,” says Quinn, whose company is part of the Non-GMO Project. He’s not into organics for the politics or the romance. For him, organic “is a a system of agriculture. If it’s done right, it allows farmers to be sustainable from one generation to the next, to grow more nutritious food, not tainted with any chemical residue. Those things are important and they do make a difference in health.” He grins. “And it’s fun to be an organic farmer.”

Quinn, who started with a handful of KAMUT seeds in the ‘70s, now produces over 40 million pounds of khorasan wheat a year on his Montana farm and on 150 other organic farms in North Dakota and parts of Canada. 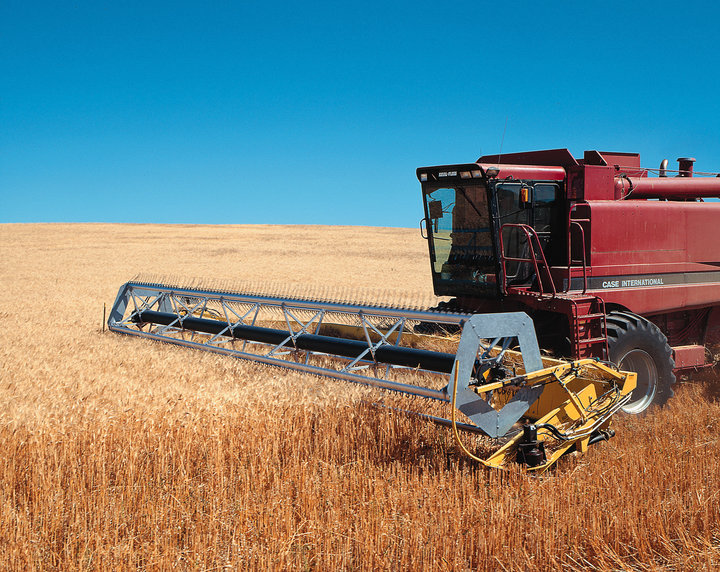 The challenge is educating people — both consumers and growers — about the value of KAMUT and the value of organic. “We’re not looking to start a panic or vote of no confidence in food supply. Our goal is to say we’re going in the wrong direction focusing on cheap food. We should focus on higher nutrition,” he says.

“We can’t afford to be filled up with foods that don’t nourish us. It doesn’t matter what kind of health care program you have. Long-term and chronic disease — no nation can sustain that,” says Quinn. “We will go broke. It’s not fun, besides.” 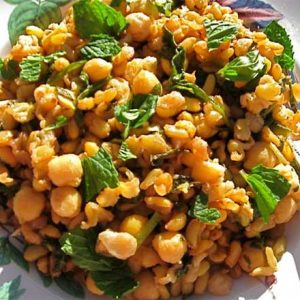 Kamut with Lemon and Mint

It is possible to be all of the above — plant-based, organic, ancient grainy and accessible. Behold this recipe for kamut. Kamut needs to be soaked overnight or at least several hours before cooking, so plan your life accordingly. This dish can be tarted up a million ways — swap the spinach for other vegetables in season — it’ll be lovely with the first asparagus of spring, if you can wait that long. Add some diced tempeh, garnish with pistachios.
Print Recipe Pin Recipe