You are here: Home / Uncategorized / Lagniappe 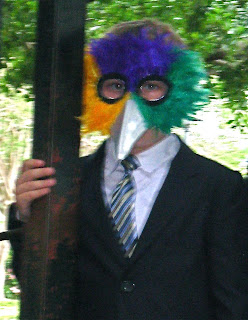 While the gumbo promised in my last post is simmering, here’s some lagniappe, the Creole term for a little something extra, no charge. Walking past New Orleans’ Jackson Square Friday morning, I saw this boy wearing a suit and Mardi Gras mask. Why? Who knows, but he was as utterly at ease in his outfit as I was in my t-shirt and jeans. This is why I love New Orleans. Whimsy is just part of the deal.

That sense of whimsy must have gotten hold of my husband, because he ordered bread pudding at lunch. Bread pudding is a New Orleans tradition he’s never gone for. My husband has spurned bread pudding, rice pudding, tapioca pudding or any kind of pudding that is not chocolate. And yet he ordered the bread pudding with whiskey sauce at Bon Ton Cafe. It arrived, a dense, golden square in a puddle of sauce so boozy you could smell it from a table away. It made him happy. Since then, he’s tried a lighter, fluffier French toast-esque bread pudding served at Creek 28 on Miami Beach. That made him happy, too. He now maintains he’s never had anything against bread pudding, but I’ve seen him sneer at it enough times. That’s why I’ve never bothered to make it for him. Until now.

Vegan though I am, I am a great believer in the benefit of puddings and custards. There’s something nursery food about them, soft and sweet and primal. They evoke memories of childhood and for me, a bit beyond. I recall being in the infirmary with mono my freshman year of college (oh, don’t ask). The clinic nurse kept bringing me bread pudding from the cafeteria. It was the only thing I could swallow.

Here is my own bread pudding recipe, which skews towards the light and fluffy. It will be a gorgeous puff when you take it out of the oven, then deflate a bit. It’s received spousal approval on its own, but I’ve also included the whiskey sauce from Bon Ton Cafe to make the bon temps rouler. Enjoy. Now if you’ll excuse me, I must get back to my gumbo.

French Toast Bread Pudding
1/2 cup raisins
1/3 cup bourbon
1 loaf brioche, challah, panetonne or other soft egg bread, crusts trimmed, cut into 1-inch pieces
1-1/2 cups milk
3/4 cup cream
3/4 cup sugar
4 eggs
1 tablespoon cinnamon
Combine raisins and bourbon in a small bowl or jar and macerate for one hour or as long as overnight. Do not drain.
In a medium saucepan, pour in milk and cream and heat over medium-high heat until warm. Add sugar and whisk to dissolve. Remove pot from burner. Beat in eggs and cinnamon.

Butter a large baking dish. Place bread in dish, pour egg mixture over bread, add raisins and bourbon, mixing gently to coat.
Cover with baking lid or wrap tightly with foil and refrigerate for 4 hours or up to overnight.
Remove from fridge an hour before baking to allow pudding to come to room temperature. Then bake at 350, covered, for 1 hour. Then remove cover and return pudding to oven for 10 more minutes, so the top turns golden-brown and ever-so-slightly crusty. Remove from the oven and serve hot, warm or room temperature.
Serves 6 to 8.
Bon Ton Cafe Whiskey Sauce
1 stick unsalted butter, room temperature
1 cup confectioners sugar
4 tablespoons whiskey
1 egg
In the top of a double boiler over simmering water, stir together butter and confectioners sugar. Keep stirring until confectioners sugar has dissolved and the mixture becomes creamy. Do not let butter melt. Remove from heat. Whisk in the egg and continue beating to allow sauce to cool. Stir in whiskey. Spoon over pudding. Yee-hah.