You are here: Home / Culinate / An Interview with Madhur Jaffrey

Women’s History Month honors the efforts of every woman. Together, we are making history. We are the path forward. But we couldn’t have gotten this far without those who’ve come before and did some heavy lifting. Today’s Indian vegan cookbook stars, Vegan Richa and Romy Gill, owe a lot to Madhur Jaffrey, and so do I.

I was in high school before I tasted curry. I was out with a guy. He had a driver’s license, and he introduced me to Indian food, so he had that going for him. What became of him after that I cannot recall. But Indian cuisine has been a lasting love. It was a thrill to meet Ms. Jaffrey several years ago and interview for Culinate.

If you’ve never set foot in India, but you know chutney from chapati, you probably have Madhur Jaffrey to thank. When America barely knew what curry was, the Delhi-born Jaffrey encouraged us to explore the subcontinent’s cuisine with her seminal 1973.

Since then, she’s written nearly 30 more cookbooks, including At Home with Madhur Jaffrey. Named one of 2010’s best cookbooks by the New York Times, the book combines the traditional regional flavors of India with modern, streamlined techniques. Not bad for a girl who started out as an actress knowing “absolutely nothing” about cooking, Indian or otherwise. 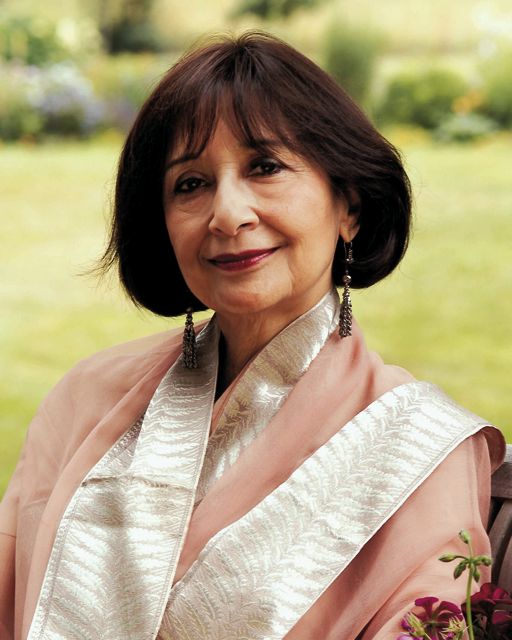 Jaffrey always knew good food, though. The tasteless gray grub she encountered in London while studying at the Royal Academy of Dramatic Art had nothing in common with the childhood dishes she described in her 2006 spice-scented memoir, Climbing the Mango Trees.

Desperate, she wrote to her mother, begging for recipes, and in her 20s, she learned to prepare the foods she loved from home. In between performing on stage, for television, and in films — including a number of Merchant Ivory productions — she became, as she puts it, an accidental cook.

Though “open to every kind of cuisine” and an unabashed fan of pasteurized milk and iceberg lettuce, Jaffrey always returns to the food of her homeland, as with her recently published 100 Essential Curries, part of the My Kitchen Table series.

In At Home with Madhur Jaffrey, you write about culinary overlap — how Indian, Sri Lankan, Bangladeshi, and Persian cuisines draw from and riff on each other.

They’re all related in some wonderful way. There’s an undercurrent of techniques coming from abroad that weave their way into different countries. When you talk about authentic cuisines, everybody’s influenced by everyone.

An Indian is particularly ready to absorb and understand foreign cuisines — foreign to India, that is. First of all, we were a British colony, the French ruled us, the Portuguese ruled us — we know a lot about European cuisine, to begin with.

Indian cuisine has hundreds of spices, hundreds of methods of seasoning. There’s almost no technique or seasoning we don’t know.

But America is a blend of cultures and cuisines, too. Do we qualify as having an authentic national cuisine?

India has a cuisine that goes back thousands and thousands of years. America has developed in 300 years — that’s such a short time. There are odds and ends — a hamburger, a hot dog is considered American. It takes much longer for a cuisine to be a cuisine of the nation. You have to wait a bit.

How have you seen American food culture change since you first published An Invitation to Indian Cooking?

The American palate has changed so much. The capacity to eat hot food was very limited when I came to this country. There have been great changes in the amount of heat that the American palate has now come to love. The spices and seasonings have become more and more and more; the sauces are getting hotter and hotter and hotter — Mexican salsas, hot sauces from southeast Asia, Indian hot sauces. They say there’s no returning when you come to eat hot food.

We’re much more open to regional foods. We travel a lot, whether it’s Japan or Indonesia or Italy or France, and we know much more. Every food writer should travel. There’s so much to learn in every country. You can’t learn it from books, really.

What about food and geography — do some dishes work better in Mumbai than in Manhattan?

Every time I‘m in Japan, I buy a whole lot of teas, and I bring them back. I’m so excited — it’s the setting, everything about it allures you. In Manhattan, it’s not the same thing, and I find I don’t often drink them in the same way. The atmosphere is different, and they sit around.

Do you think cooking is an innate talent, or is it something that can be taught?

My husband and I always discuss this. He says you can learn. I say you can learn to a degree. Some people can improvise more on their own, some people less. To cook well, a palate is essential.

My husband’s a musician. He hears music, and he retains it. He can play it in his head anytime and compare and contrast. I can do that with food. Anything I’ve eaten that’s impressed me is in my head. I can use it for comparison, for contrast, to build up a whole wall of knowledge.

It’s the same with any sense, any part of you that’s developed, even a mathematical sense — I have zilch, but I know people who so love numbers, it becomes part of their life, they see things in terms of numbers, are able to solve problems with numbers very easily. I think it’s the same with tasting. Once you have that ability, you hardly know you have it, but you retain it.

What do you advise the palate-challenged? Or someone starting out the way you did, not knowing anything about cooking?

I knew absolutely nothing. I want to encourage people to cook.

The most important thing with Indian food is: Don’t be frightened. Get only the spices for that recipe, the ones you need, so you’re not overwhelmed. I like to taste as I go. I like other people too, so they know how to do it. See what you’re aiming for at each stage. If you like that dish, then make it again. Make it a few times. When you’ve mastered it, make another. Don’t try to do a whole big thing of 10 Indian dishes. I think that’s the way to go.

Having learned to cook from your mother’s letters, how do you go about collecting recipes?

My mother was an extraordinary case. My mother cooked the food I ate. I pretty much knew the taste of it. I could fix the recipe from her three-line explanation. I knew what I was aiming for.

It’s a tricky business, writing good recipes. Marcella \[Hazan\]‘s always work, Julia Child’s recipes work. Very few people like that give you the details you need. People can’t always write recipes as fully as I want them. People leave out things. You know — how high is the heat? What kind of pan do you use? A wider pan? A taller pan? I get a sense of all that when I’m watching it being made.

When I go collect recipes, I insist people cook them for me, that I watch them cook. It’s important to see the technique and the amounts. I want to trust what I see. I know I will write the recipe; I trust myself to do it and no one else. I test them again and again. It’s important I convey a complete sense of the recipe.

You’ve done award-winning cooking shows for television, but you keep coming back to writing cookbooks. What does a cookbook do that a food show doesn’t?

It gives details and background that you can’t always do on television. It gives depth to the recipe; it gives a reference to the recipe, its place in culture and history. The context is very important. Not because it’s foreign cuisine; I’d want the same about a Southern recipe. I like to know the author’s relationship to the recipe.

A collection like The Fannie Farmer Cookbook tells you how to cook roast beef, how to roast lamb, but it’s a collection without any point of view. A book is more interesting to me if I get the author’s take on the recipes.

What does acting have in common with cooking?

Cooking is a kind of performance. You aim for a kind of perfection — I do, always. You want to do it right, make an impression, you want it to be distinguished, in a way. I cook for myself as carefully as I do for my family or my husband. It is like a little performance for a very small audience.