You are here: Home / Uncategorized / Banana Bread and the Theory of Relativity 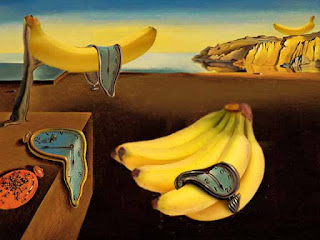 Fabulous art courtesy of the fabulous Philip Brooker.
I got thinking about banana bread this morning when I saw the bananas on the kitchen counter had gone all black and gnarly.  This is a good thing — tired, past-their-prime bananas are what distinguish a superior banana bread from its pale, dry imitations.
My grandmother’s banana bread was the first I ever tasted and it’s spoiled me for any other. She made it with sour cream or sometimes soured milk (which scared me as a kid).  I use fat-free yogurt.  It adds happy probiotics and richness, but less fat and ameliorates for me the butter and sugar in the recipe. There are more Spartan and ascetic banana breads out there, but they are not worth eating.  This banana bread is tender, moist, banana-intense, racy with vanilla, homey and comforting.
It’s also a high performer on the perceived effort-to-reward ratio. “Oh, but you went to so much trouble,” people tell me as they slice it and snarf it.  Nah, it’s a breeze.  I make it all the time. Friends and family donate their nasty bananas and I’ll have a loaf of banana bread to them later that day.  The princess in Rumpelstiltskin could spin straw into gold.  I spin bananas into banana bread.  I cannot spin them into gold — that’d be a talent worth having.
Seeing as how I had rotten bananas this morning, I made a batch of banana bread on my lunch hour.  In seven minutes.  Really — I clocked it. The only head start I gave myself was taking the butter out of the fridge ahead of time so it could soften.  I started creaming the butter at 12:53 and had the whole shebang in the oven at 1:00.  It is now 1:42 and the house smells heavenly.

When I was little, my grandmother baked banana bread and the process seemed like going to church –it was ritualized, filled with mystery and above all, lengthy.  So how do you account for the fact I can make it in almost no time now?  Einstein would have answers. Me, I just have banana bread.
I also have this link to Joe King Carrasco singing “Banana,” which its jubilant chorus, “All the nation like banana” —  http://video.aol.com/video-detail/joe-king-carrasco-banana/4120089506/?icid/=VIDLRVHOV03.  How to describe Joe King Carrasco — a quirky ’80s Tex-Mex musician who in the depths of Goth had the cojones to be relentlessly fun.  Where are you now, Joe?  I still have a photo of you in the bathtub (with crown) and my prized autographed Joe King Carrasco  t-shirt.  Come back to Miami any time.  Banana bread’s on me.
Banana Bread
1 stick butter
1 cup sugar
2 eggs
2/3 cup fat-free yogurt
1 teaspoon baking soda
2 cups flour
3-5 nasty old bananas
1 tablespoon vanilla
Preheat oven to 350.  Lightly grease a 9X5 loaf pan.
In a large bowl, cream butter until fluffy.  Add sugar.  Keep beating and add eggs.
In a separate cup or bowl, measure out the yogurt and stir in baking soda.   This will make the yogurt fizz up and be very science experimenty.  This is my favorite part of the whole deal.
Work the 2 cups of flour into the butter and sugar mixture, alternating with the yogurt.  You will have very thick batter.
Mash the bananas in a bowl or on a plate, then stir into the batter.  Finally, stir in the vanilla and you’re done.
Pour batter into baking pan and bake for 1 hour until golden-brown and gorgeous.  It smells wonderful, tastes even better, keeps wrapped in foil for ages.

« Heretical Vegetable Tagine With Turnips
The Eating of the Green »