Unless you’ve been living in a cave, you’ve heard of the paleo diet, based on the premise we should eat the way our Paleolithic forebears did — meat, vegetables, fruit, nuts — no dairy, no processed food — which is most of what we eat

I’m no fan of processed food, but I’ve been no fan of paleo, either. I don’t want anyone to suffer or die for my dinner. And c’mon, the Paleo paradigm doesn’t apply to our lives now. We don’t hunt to survive, we don’t live in the wild, we eat too much, exercise too little and have food apps. Okay, I’ve been bitter about paleo since a one-time vegan friend embraced it and went back to eating meat. Vegans versus paleos is not a useful way to feel. I believe in finding the point of connection. Ellen Jaffe Jones and Alan Roettinger did the work for me with “Paleo Vegan.” 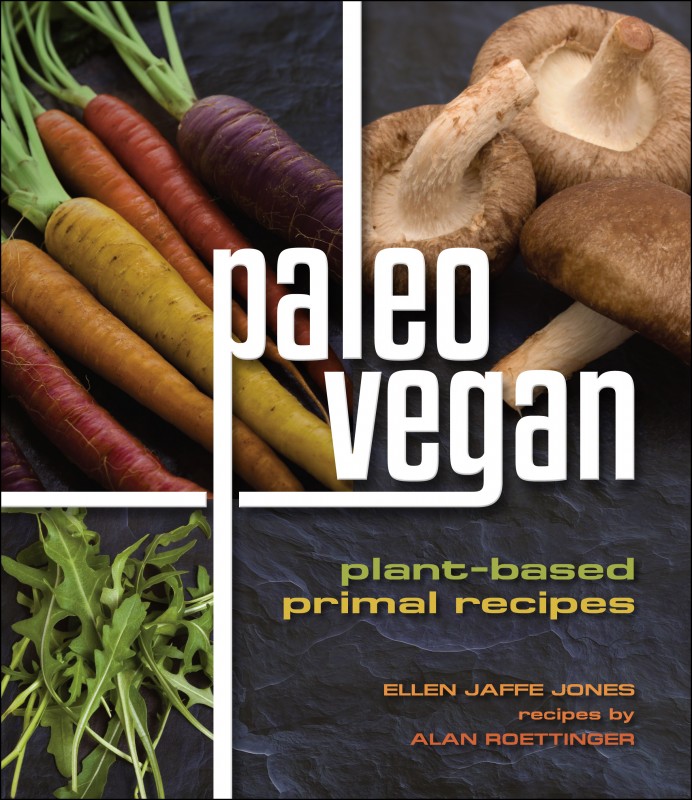 Jaffe Jones, both a hardcore athlete and a longtime vegan, provides the book’s nutritional info. She dedicates the book to “every person who doesn’t believe it’s possible to win a race on a vegan diet.” Roettinger provides the extraordinary recipes that find the delicious intersection of paleo and vegan. “It’s just vegan food that fits the profile,” he says. “It keep out the grains, dairy’s already out, you’re not putting the meat in. My vegan food is really vegetable-driven.” “Paleo Vegan” recipes are paleo without the meat. And eggs. And attitude.

Jaffe Jones leaves out the ethics and environmental impact of meat production and consumption, doesn’t touch on the fact we live very differently from our paleo relatives. She focuses on where vegan and paleo intersect. “You can adopt a paleo diet while sticking to your vegan principals.”

What I like about the paleo diet is it gets people —vegans included — to think about what they’re eating. Even a thriving vegan, Jaffe Jones writes, “can enhance your well-being by selectively integrating some paleo principles into your life.” And with”Paleo Vegan,” my former vegan friend and I can at least talk about our differences over a shared meal.

“I’m all about the food not the ideology,” says Roettinger. “Everything — eating, living — is about what are you going to do, not what you’re not going to do.” 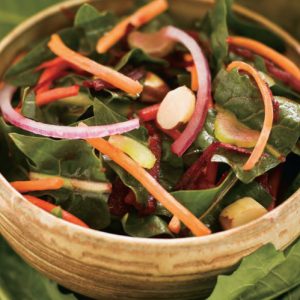  Dandelion greens are among the most healthful foods in existence. Like all bitter greens, they act as a powerful blood purifier. When combined with beets as they are here, dandelion greens also help detoxify the liver. In addition, this combo is easy on the palate because the greens’ bitter edge is tamed by the beets’ sweetness. Brazil nuts bring protein, selenium, and a satisfying crunch to the mix. Health and pleasure!
Print Recipe Pin Recipe

Recipe reprinted with permission from by Alan Roettinger, copyright 2013.