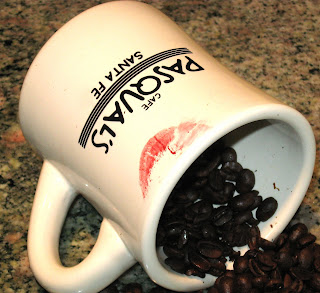 Harvard Women’s Health Watch says moderate coffee consumption can improve cognitive function and improve endurance performance. It’s rich in antioxidants, too.  I like antioxidants, I like cognition and endurance.  I also like coffee.  I try not to drink it, though.  I try really, really hard. I limit myself to a cup a week and won’t even make it at home, but go out and buy it, hence paying more.  It has not been the disincentive I’d hoped.

I’d been clean and coffeeless for years, but broke my streak when we all tend to break — in the midst of trauma (it involved a funeral, and oh, you just don’t want to know).  I didn’t even want coffee, but someone poured me a cup, I numbly drank it and boom, there I was again, hooked on joe.

My main objection to coffee isn’t the caffeine (which, being a raging insomniac, it should be) but the fact it’s one of the most acid-forming foods.   Exuberant good health comes from our bodies being alkaline.*  C’mon,  you say, an occasional cup of coffee won’t hurt you.  Even my doctor says this.  She says to lighten up.  And yet, trying to lead a healthful life, drinking coffee makes me feel guilty and conflicted.  This is an extreme reaction.  Even I realize that. Alas, I am at heart an extreme person.  You’re probably figuring this out.  And you haven’t even heard about the soya nazi yet.
A nearby popular coffee shop employs one scary waitress who always ferrets me out.  I’d order my weekly weakness, a soy cappuccino, a shot of naughty espresso ameliorated by soy.  She’d
narrow her eyes and say, “We do not have soya milk.”
“Yes, you do.  I’ve had it here before.”  Because I have.

“No.  We have never had soya milk.” She’d furl her lip.  “We will never have soya milk.”
I called the coffee shop and spoke to the manager.  He said of course they have soy milk. When I could slink in there undetected by you know, her, he’d happily make me a soy cappuccino and it was lovely.
But most of the time, there was the waitress with her Nosferatu face, her Teutonic accent and attitude and the soya milk discussion. Things escalated until I dragged her to the manager and said, “This waitress says you don’t serve soy milk, but I’ve had it here before. In fact, you assured me you have it.”
“We do,” he said.  “But we’re out today.”
The waitress flashed a demonic smile.
“By the way,” I said to her.  “You don’t pronounce the a in soy.  Because it isn’t there.”  This was a sorry riposte but I couldn’t think of a better one at the time.  I flounced out and have not returned.  It is bad enough to have a coffee jones.  I don’t need to be Gaslighted, too.
Another coffee shop has opened nearby and it is wonderful. Called Pasion del Cielo (passion of the sky?), they offer beans from various coffee-growing countries.  You choose your region, be it Costa Rica or Kona, they grind the beans right then and brew it up.  The staff is sweet, not surly, the coffee is out of this world, and I feel. . guilty and conflicted.  I feel like I’ve fallen for a bad boy who says, “Trust me, baby,” the one who’s only going to break my heart.
I hope to give up coffee again.  Some day.  Maybe.  In the meantime, I can tell you Peru makes a kickass cup of joe.  And Pasion del Cielo always has soy milk.
If you’re going to coffee, and thus acidify your body, you should balance your body’s pH level with a lovely, alkaline piece of fruit.  Or if you must pair your coffee with pastry, try this morning glory bread instead of the usual acidic processed white flour and sugar stuff.  It’s awfully easy, full of alkaline-rich carrots, pineapple, raisins, coconut and flax, and it doesn’t even taste virtuous.
Morning Glory Bread
2 cups spelt flour
3/4 cups whole wheat flour
1 teaspoon baking soda
1 teaspoon baking powder
4 carrots, grated (about 2 cups)
1 8-ounce can crushed pineapple with juice (do not drain)
4 tablespoons ground flaxseed (also called flaxseed meal)
1/2 cup vegetable oil
2/3 cup molasses
2/3 cup sugar
1/2 cup shredded dried unsweetened coconut
1/2 cup raisins
1 tablespoon cinnamon
1 tablespoon vanilla
Preheat oven to 350.  Lightly oil 2 9″ by 5″ loaf pans.
Into a large bowl, sift spelt and whole wheat flours, baking powder and baking soda.  Add grated carrots and toss to coat.  Stir in pineapple with juice, oil, molasses and sugar.  Add coconut, raisins, cinnamon and vanilla and stir until just combined.  Batter will be thick.
Pour into loaf pans.  Bake for 1 hour.
Makes 2 loaves, one to freeze or give as a gift, one to enjoy with a cup of coffee.
* For a list of alkaline and acidic foods, check out
http://www.essense-of-life.com/moreinfo/foodcharts.htm.