You are here: Home / MAIN COURSE / Ghent — On Board for Vegetarian Day 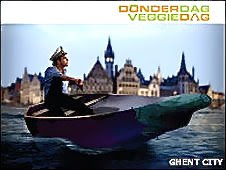 On Board for Vegetarian Day

Can you legislate a meatless life?  The folks in Ghent are trying. According to a United Nations report, livestock is to blame for nearly a fifth of greenhouse gas emissions.  The mayor of Ghent has taken this to heart and has launched Veggiedag, in which civil servants and school children will be provided meatless meals one day a week.

The mayor feels it’s a win-win.  Ciizens will reduce their risk of obesity and reduce their carbon footprint.  A self-described flexitarian, he’s hoping others will join in as an act of solidarity. While meat will not be banned outright, Thursdays may be looking grim for beef-loving bureaucrats.
I’m on board, even if Belgian bureaucrats are not, and wanted to create a dish in honor of Veggiedag.  But what? The Belgians are known for waffles, beer and chocolate.  Technically vegetarian, not to mention delicious, they don’t comprise the most nourishing diet.  I’d rather have a Veggiedag meal with, you know, vegetables.
When it comes to local produce, the Belgians boast two — Brussels sprouts, your classic Belgian crucifer, and Belgian endive, or chicory.  But the Brussels sprouts in my market are not grown in Belgium, they are from Mexico, and the endive looked world-weary and downtrodden.  And since the posterboy for Veggiedag is seen zipping about the canals via eggplant, I went with eggplant, now in South Florida, in all its glossy purple glory.
Behold, here is a re-envisioned Belgian classic, carbonnade a la Flammande, an ale-rich beef stew gone beefless.  Your traditional dish basically consists of beef, beer and onions.  This strikes me as lonely.  Here, eggplant is abetted and enriched by carrots, celery and mushrooms.  It lightens up the classic, yet honors the beery tradition.  And it’s pretty luscious. Because while you can try to enforce people to go vegetarian, I prefer to entice them. 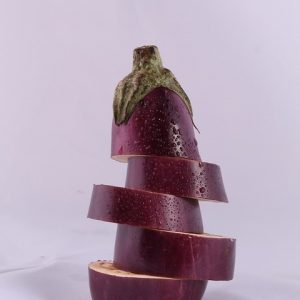