You are here: Home / LIGHT MEALS / Back to Nature Vegetable Soup

Ah, the French. I love them, but I don’t pretend to understand them. And I’m not sure they get us, either. Of all America’s contributions to culture, who do they fall in love with? Jerry Lewis. When I was there last week, everyone was playing ‘70s disco — and everyone knew the words. They’ve also embraced or at least accepted other dubious aspects of American culture, including fast food and supermarket chains.

On the up side, they’ve embraced some positive change, too. Compared to the Paris I visited ten years ago, being meatless is more widely accepted. We have Meatless Monday, they have un jour sans viande, a day without meat. They also have meatless societies. They just don’t make a big deal about it the way we do.

Being excited about things is part of America’s charm. It’s our nature. Nature, in French, roughly translates as plain. What it really means, in culinary terms, is food prepared simply, but with honor and care. While almost every bistro menu offers meat both raw and cooked, they also offer an assiette de legumes— a plate of fresh, seasonal produce prepared nature. When I was there, that meant enjoying leeks braised to sweet, silky perfection without a hint of sharpness, tender, warming lentils, sauteed mushrooms — not just your basic buttons, but wild, chewy, gnarly guys almost as perfumey as truffles. Every cafe ladled up rich, spiced pumpkin soup and offered a profusion of roots — carrots and parsnips simmered to release their natural sweetness, beets and radishes grated into salads and dressed with a stylish vinaigrette. Cuisine nature isn’t austere, it’s opulent. And the tradition is as old as France itself. 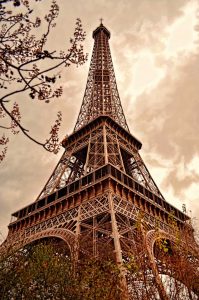 I visited bistros and spice merchants and bakeries that date back not just generations, but centuries. My theory is while the French think monogamy is quaint and faintly ridiculous (just look at all the French sex farce films), they have an intimate, committed and serious relationship with their food dating back to before we were even a nation. La Varenne’s Cuisinier Francois — literally, the cuisine of France, came out in 1651.

Paris may have modern food megastores like Carrefour and Monoprix, but they can’t compete with the city’s tradition of open-air markets. Farmers markets are fun and fab here, with an almost festival feel. Parisian markets are serious — no face-painting, no balloon animals, no clowns. Yet on a bitter morning when the temperatures were below freezing, the street market on rue d’Aligre was choked with locals shopping the profusion of fresh produce, just-baked breads and astonishing array of cheeses made and sold by people they know and trust, just as it’s been for centuries.

Perhaps it’s the wisdom that comes with age, but the French have an intrinsic understanding and appreciation of seasonal, local food, of eating what you have at hand when you have it. They have a sense that of course you don’t import Chilean grapes in the winter — what a crazy American notion.

The French devote more time and more money to their food than we do. They shop more, they cook more. We get excited about making meatlessness a socio-political act — that’s part of our odd American charm. They make meatlessness delicious. That’s their nature. Viva la France. 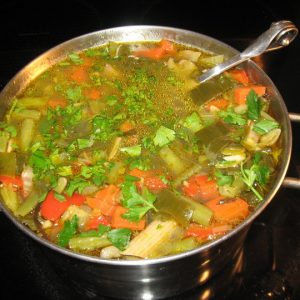 Back to Nature Vegetable Soup

I love big flavors — lemon, saffron, chili, wine. But my trip to Paris reminded how full of flavors vegetables are all by themselves — naturally. This comforting soup lets the vegetables do the talking and is perfect for January, National Soup Month.
Print Recipe Pin Recipe