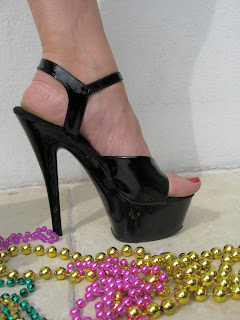 One summer many years ago, my father had some work around New Orleans and not much money, so he brought my mother and me along and turned it into a holiday. We stayed in what must have been the French Quarter, in a smallish room with wood-slatted shuttered windows opening out onto a narrow balcony.

The street smelled of dust and August heat — a heat that stunned, turning me alternately soporific and whiny. We walked to a bakery where my father took me and said I could have anything I wanted. Heat-wilted, all I wanted was a lemonade.

We went to Brennan’s — my parents’ big splurge. My mother fell in love with oysters Rockefeller. I fell asleep at the table. I was six and the concept of fine dining was lost on me. We came back to find a maid had come for turndown service, leaving chocolates on the pillows, which were squishily soft by the time I ate them.

The next day, my parents decided to ditch me. In what seemed the worst kind of betrayal, they casually announced they were going out that evening. They took off for a good time, leaving me in the care of a woman I’m sure had an enormous heart. She had an enormous everything, spilling out of the armchair, filling the room, sending me to retreat to my rollaway cot by the window. She had thick glasses with greasy fingerprint smudges on the lenses and a plastic Barbie-colored hearing aid. I’d never seen one before and it frightened me. The two of us smiled at each other or bared our teeth the way our sparring Paleolithic forebears were said to do, to show we were evenly matched and needn’t try to dominate each other. We attempted neither play nor conversation.

I went to sleep before my bedtime, wishing this woman away. By morning, my wish had come to pass — she was gone and my parents were back from Bourbon Street. What’s there, I asked.

My mother, who’d patiently explained sex to me the year before, now smiled showing all her teeth, the way she did when she wanted to convince me of something, the same way the babysitter and I’d smiled at each other. Men like to watch naked ladies dance, she said. My mother had never lied before but I couldn’t see the truth or wisdom in this. Until later that night.

We walked by a bar and honest to God, there was music blaring and up on a stage, a hoochie mama wearing an inch or two of something green and sparkly, danced, pranced, strutted. Her boobs bounced.

I don’t think my parents rushed me past the door — they were progressive and cool and all that. But I was only six. I was too embarrassed to stare — blushingly embarrassed for the girl, mortified for myself. New Orleans seemed a place of betrayal and depravity and I was finished with it.

Fast-forward a few decades and my husband, a Tulane alum, took me back to New Orleans for homecoming. It was May, it was muddy — the city a sea of mud. I promptly ruined a new pair of shoes I’d gotten just to beguile my husband’s fraternity brothers whom I’d never met and withstand the scrutiny of their wives.

The shoes didn’t matter. My husband’s old college friends took me in, as did their wives, as New Orleans naturally does. They would have done regardless of footwear. They could have thrown me a parade and I wouldn’t have felt more welcome than I did by this. Yes, New Orleans is all about laissez les bon temps rouller, letting the good times roll, but it’s also about laissez faire, letting things be. New Orleans happily take you as you are, however that is (see April 27 ’09 post).

The things most people love about the city — the bars, beignets, Bourbon Street — they’re all there, but it is to me other delights — the lacy wrought iron balconies on the Victorian homes and the strangers who toast me from them, the mule-drawn caleches. Mules endure New Orleans’ heat and humidity better than horses and don’t object to me petting and cooing over them, either.

I am amazed by the Jazz and Heritage Festival, accommodating 40,000 people with five stages spread out on a race track. Somehow, there is room for everyone, the sound from the Elvis Costello stage doesn’t carry over into the Gospel Tent, and for every band you’ve come to hear, there’s another one you stumble upon and fall in love with. You can’t get fast food burgers in the food court, but there’s oyster po’ boys, crowder peas and okra and dirty rice, with bottles of Tabasco at every kiosk.

We go back at least once a year now and I ruin a pair of heels every time. Sometimes the mud does it, sometimes it’s from walking the French Quarter’s cobblestone streets. The sensible thing would be to wear sensible shoes, but New Orleans is tolerant of your pleasures. If you want to wreck your shoes, go ahead. It indulges everything, including your own brand of madness.

As a child, I was a harsh judge of New Orleans. New Orleans never judged me. I, so intolerant of my own weird quirks, am utterly disarmed by this place that says, hey, you’re fine, we love you like you are. This wisdom comes from age and is not a lesson I could fathom as a little girl.

New Orleans has had to learn its own hard lesson. After the wreckage by Hurricane Katrina, it set about doing what it did not want to do — resurrecting itself, but settling into the task with a grim determination. It is still recovering, but Mardi Gras beads keep the city shiny. So does hope. Happy Mardi Gras. 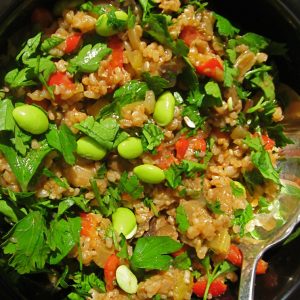 Down and Dirty Rice

Traditionally what makes dirty rice dirty is the addition of fowl gizzards. Um, no thanks. Chopped eggplant, a Louisiana crop, takes the place of organ meat in this super-satisfying vegan version Not spicy in itself, but you can make it that way. That’s what Tabasco is for.
Print Recipe Pin Recipe
Servings 6

Serves 6 to 8. Keeps several days in the fridge, flavor improves over time.

« My Chaat with Mayukh Sen
Mamaliga »