You are here: Home / MAIN COURSE / Nobody Here But Us Chickens

I was happy to see Susan Orlean had an article in a recent New Yorker. I had liked The Orchid Thief and The Bullfighter Checks Her Makeup, but her New Yorker article showed me a side of Ms. Orlean I had not known — she is a liar.

In “The It Bird,” Ms. Orlean chronicles her adventures keeping chickens and how they have made her “the object of more pure envy than I have ever experienced in my life.” Okay, maybe she’s not a liar. Maybe she’s just deluded. As a former keeper of poultry, I know what I’m talking about.

You don’t just decide to take in chickens — I didn’t, anyway. I just looked out one morning to see half a dozen of them parading though my back yard. I live in the city. The chickens hadn’t just wandered over from the neighbor’s farm. They were, I figured, Santeria escapees. I came outside to investigate. 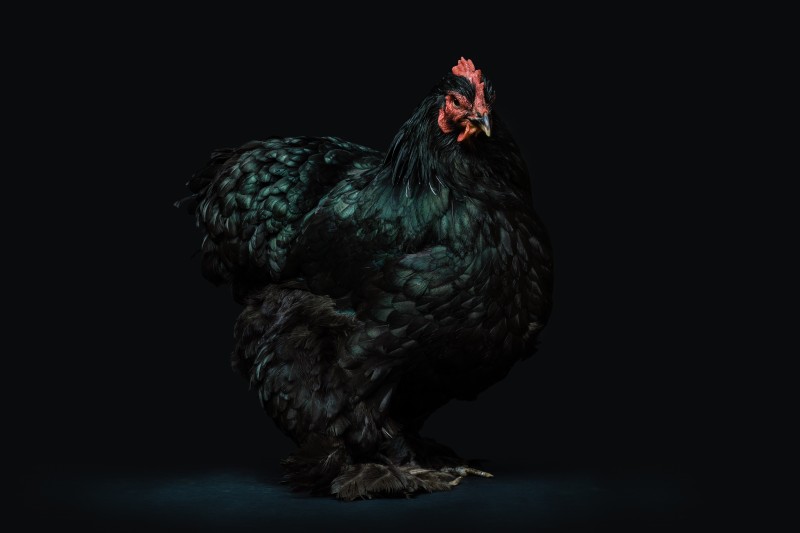 The chickens saw me and knew me for what I am — a soft touch. They clustered around me, fluffed their feathers and emitted sweet, gentle peeps. They followed me around and would have come inside had I not closed the door. From the window, I watched them eating bugs, scratching in the dirt.

The next morning, they were still there. I fed them what was on hand — Rice Krispies. After a week, they were still hanging around, so I went to the pet store and bought a bag of Chicken Scratch. They loved it. They loved me. Perhaps Ms. Orleans is in this honeymoon phase of poultry harboring. It will not last.

The chickens quickly went from peeping to squawking and crowing — just like on a farm. But these were not farmyard friends. These were tough urban fowl. They could not tell the street lights from sunlight, so they’d crow at three a.m. Four a.m. Five a.m. I’d expected they’d be better bred. I’d hoped they would reward my kindness by good chicken behavior. They burned through bags of Chicken Scratch and ringed my house with guano.

Speaking of chickenshit, my neighbors said nothing to me directly about the chickens. Clearly, though, they were aware of them. They ratted me out to the City of Miami zoning department, which assessed me a $500 fine. I was officially now a criminal.

I began a campaign to get rid of the chickens compassionately. The Humane Society laughed at me. The city’s animal control office said they were too busy, that I should catch them myself.

“It helps to get them drunk,” said the animal control officer.

The animal control officer hung up on me.

I exhausted legal avenues and stumbled onto those that were somewhat other. They’re out there, you just never know until you look. I came in contact with itinerant people who said they’d catch the chickens. We made arrangements. They never showed. Then I met one guy. He wouldn’t give me his name. Said it was better that way. Said he’d come around after dark. This was guy I could imagine would drink with chickens. He’d drink with anybody.

I asked how he’d catch the chickens.

Okay, on the one hand, I was desperate. But I had reared these guys. I hadn’t chosen them, but they’d chosen me. Could I foresake them? They had become loud and nasty and a social and financial liability. But did I want blood on my hands? Even a chicken’s? What is a chicken’s lifespan, anyway? And if I kept them, what kind of quality of life could I offer them? I still had the City of Miami zoning department after me.

The chickens went to a better place. I do not mean they were killed. I mean I took them somewhere else. One night (after dark, as my potential chicken murderer would say), abetted by a friend who’d grown up on a farm, I rounded up the chickens. Actually, I chased and swore at them to no avail while she rounded them up, swiping them from the ground as though they were toys her kids had left behind. We loaded the chickens into a cardboard box and put the box in the trunk of my car. By the way, chickens do not sit calmy in a box. They do what they do best. They make noise and guano.

I was never the preening poultry keeper Ms. Orlean is, was never envied by others. I had to spend an entire day in court (my case number: # 279) before the zoning department dropped my case. I’m clean. I don’t have a rap sheet. I count myself fortunate. But I know myself. I’ll always be inclined to take in strays who may repay me with sleepless nights and copious guano, metaphoric or otherwise. 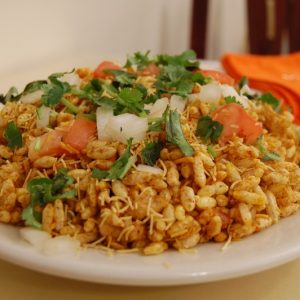 So -- what recipe to make for this post? Tough one. I thought of a Madonna tie-in. You can find anything on the internet, so I did a quick Google search -- typing in Madonna’s favorite food. Someone responded, “The tears of small children.” I like this a lot, but it does not lend itself to a recipe. Someone else responded, “Salmon.” Gosh, no thanks. I went back to thinking chickens, Chicken Scratch, Rice Krispies. Eureka. What follows is a very easy and healthier-than-usual version of bhel puri, the classic Indian snack, made with puffed rice and veggies.
Print Recipe Pin Recipe