Twenty-two-acre Kingsbury Farm serves Warren, Vermont, a population of under 2,000. Johnson’s Backyard Garden is 200 acres, but as they say, everything’s bigger in Texas, including this organic farm which serves Austin, a population of roughly 800,000. The two farms are 2,000 miles apart, but both farmers use sustainable practices, and unlike Texas governor and Republican presidential candidate Rick Perry, both believe in climate change.

“Carbon warms the planet,” she explains. “The planet has gotten warmer by at least one degree. Everything’s in extremes. We’re seeing this kind of flooding here and we’re seeing another Dustbowl in Texas.”

Indeed, it’s the worst drought in over a century. “In severe drought, vegetables don’t last very long,” as Johnson’s Backyard Garden’s Brenton Johnson notes. “I feel strongly about global warming.” So strongly, he worked with Austin Green Art to do a 15-acre art installation of cover crops grown to display the number 350. Environmental scientists assert 350 parts per million of carbon dioxide is our planet’s sustainable limit. We’ve been tilting closer to 400. ‘We were helping our fields with cover crops, but people flying over our farm wanted to know, ‘What’s that big 350 in the fields for?’” says Johnson. “We raised a lot of awareness for carbon dioxide levels.”

Both farms grow produce in states better known for cows. It takes more carbon, water and land to raise cattle than it does to grow carrots.

Before Johnson began farming — literally in his own backyard — he worked for the federal government, doing water conservation with the Bureau of Reclamation. He waters his crops with drip irrigation to avoid having his well run dry. “When I got into farming, I knew being in Texas, having water was critical.” 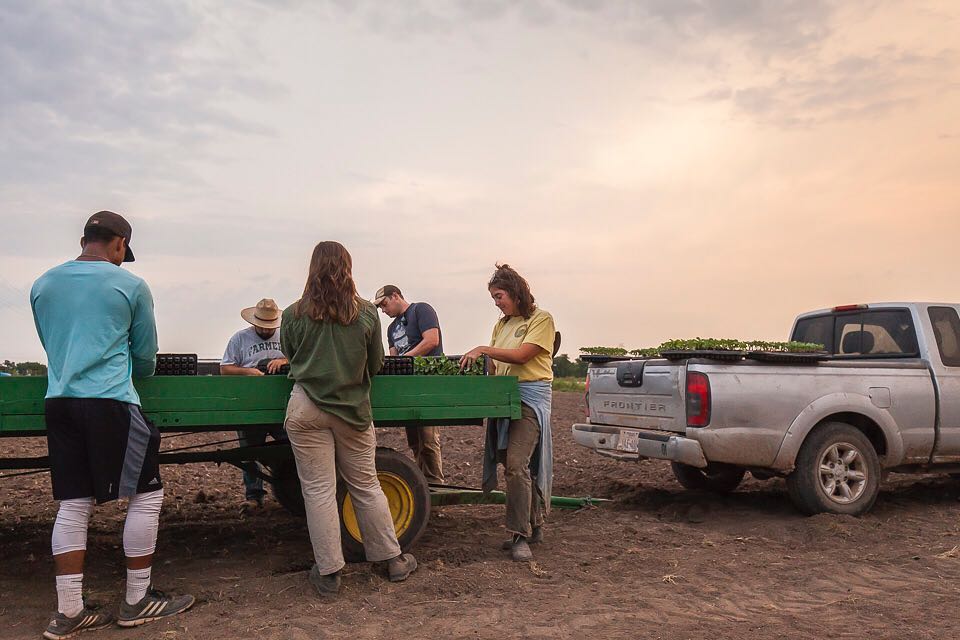 Of course it has to be the right kind of water. Slomin and her husband Aaron Locker harvested as much as they could before the storm, but had to plow over much of the rest. USDA guidelines state produce in contact with flood water may be at risk of contamination and is illegal to sell.

“We have two fields that didn’t flood.” That means another month of salad greens, potatoes, carrots, cabbages and “an extraordinary amount of Romas.” Kingsbury’s tomatoes inspire rapture, even lust, but the restaurants who usually buy them were closed after the storm, so “we canned maybe 700 pounds of tomatoes. We’re not Campbell’s Soup, we’re doing it old school, but we wanted to keep people employed.”

Warren is a tight community and since the hurricane, there’s been a flood, you should pardon the term, of local support. Volunteers have worked to clear the fields. The farm supplies Vermont Foodbank, and though the foodbank has granted them a reprieve, “this what we can do and now is when it’s needed,” Slomin says. The farm still contributes a portion of its harvest. A quart of those canned Romas, though, sells for $15. “It’s not viable economically.”

Maybe Rick Perry doesn’t believe in climate change, but extreme weather is affecting the farmers in his own state and what they grow. It’s happening all over the country, all over the world. The result is less food that costs more.

“It’s not going to get better until we get a lot of rain,” says Johnson, but his raincoat just hangs in the barn, coated with dust. Last week’s wildfires blazed dangerously close around them. “We could see them from the farm. We realized they could burn down our barn, our equipment.” To protect the fields, he plowed over his cover crops the same way Kingsbury Farm plowed over their flooded fall vegetables.

“Food and water and population — they’re entirely tied up in each other,” says Slomin. “We’re all connected.”

Support your local farmer. Or become one. “Start a garden in your back yard,” says Johnson. “People need to eat healthy and produce some of their own food. The only reason we have a business is because people aren’t doing it.” 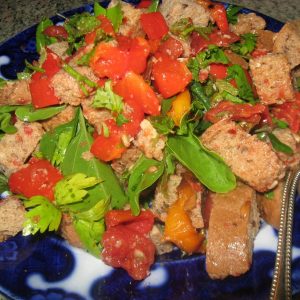 Panzanella, your classic Mediterranean tomato-bread salad is a great way to play up end-of-season tomatoes and use up tired bread, too. Plus, it feeds a crowd. You can stretch and embellish it by adding any number of ingredients, including drained chickpeas, chopped cooked green beans, kalamata olives, diced cucumber or chopped roasted peppers, but at heart, the recipe relies on good bread and ripe tomatoes. Panzanella can be heavy on the oil. Here, the dressing features the collected juice of chopped tomatoes, keeping it light and bright.
Print Recipe Pin Recipe

Recipe doubles easily, sturdy enough to handle sitting around at a picnic or buffet.