You are here: Home / LIGHT MEALS / St. Patrick’s Day Bubble and Squeak (The Eating of the Green)

Who cares about green beer? Last month, I was blissed to find soy milk and almond milk in every coffee shop in Dublin. Every eatery had a vegan option or could craft one without fuss and didn’t look at me like I was crazy. I even talked aquafaba meringues with a waiter—big news in a country where dairy and meat have traditionally been a big part of the plate and a big part of the Gross National Product.

I presented at Happy Food Cafe, Dublin’s first and only all-vegan cafe, where the beetburger- chowing crowd hungered not just for vegan eats but to create vegan consciousness and vegan community. Passionate about animal welfare, they seemed slightly embarrassed all of Ireland hasn’t embraced it, too.

Maybe it’s not happening as fast as Dublin’s vegan crowd would like — honey, I’m familiar with the feeling —but the move to vegan has been happening in big ways and small. Dublin had its first-ever vegfest in November and Dublin VegFest 2017 is in the works now, spearheaded by the mighty Pears Hussey and “a small dedicated group of people passionate about vegan living.” That’s all it takes to bring about change. 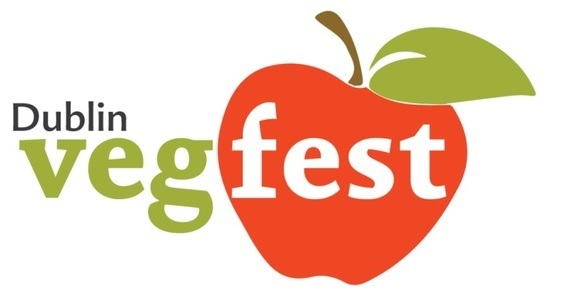 In 1898, a dedicated and passionate Irishman, playwright (and vegetarian) George Bernard Shaw wrote, “Why should you call me to account for eating decently? If I battened on the scorched corpses of animals, you might well ask me why I did that.” About 90 years later, Morrissey, Smiths frontman, Irish vegan and PETA activist extraordinaire came out with “Meat is Murder.”

Beetburgers, plant-based milks and chickpea blondies may be all but mainstream, but they weren’t always. For many years, Ireland’s mainstay crop — and the mainstay meal — was potatoes. And then, when the crop failed, it wasn’t. During the Great Famine, 1.5 million Irish died of starvation. You tend not to forget a thing like that, no matter how long ago it happened.

Food is precious, valued in Ireland in a way that it isn’t in America. I learned about farm to table in Ireland years before it was big here. I learned about it at the farm. At the table. It’s so intrinsic to how they’ve lived, they didn’t even have a term for it. Coming from America and our monster centralized food system, I couldn’t believe a simple roasted newly-dug potato could taste so minerally and rich and fall apart in my mouth like a puff of cloud. I could feel the potassium shoot through my veins like a junkie getting a hit.

Forget corned beef and cabbage (not vegan, not Irish) Celebrate St. Patrick’s Day with a potato. Planting potatoes on St. Patrick’s Day is an Irish life-affirming tradition. Potatoes also star in my vegan version of that age-old Irish comfort food, bubble and squeak. A simple hash of cabbage, kale or other seasonal vegetables held together by potatoes, it’s not only greater than the sum of its parts, it’s sustainable and farm-to-table as it gets. Nice with a pint of vegan Guinness. 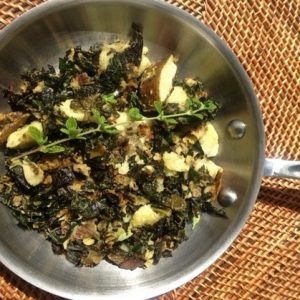 St. Patrick’s Day Bubble and Squeak (The Eating of the Green)

The nutty name comes from the sound of potatoes bubbling on the boil and then squeaking in the hot skillet. My potatoes don’t always squeak, but my husband loves this dish. I love it because it’s quick, easy and a brilliant use of greens. You can make it even more nutrient-dense by swapping sweet potatoes for baking potatoes, you can ramp up the flavors by adding a tablespoon of nutritional yeast or teaspoon of smoked paprika or curry powder, but you owe it to yourself — and the Irish — to try the simple farm-fresh original.
Print Recipe Pin Recipe