You are here: Home / LIGHT MEALS / Sweet Potato Salad With Tahini and Ginger

Green Grass Roots and a Beacon of Hope from Signal Mountain

I’m grateful for the buzz generated by my April 10 Meatless Monday post on the power of activism. To keep the interest and activism going, here’s an encore Meatless Monday, which originally ran on March 18, 2010. It still inspires me.

The world’s leaders did not come together for us in Copenhagen. The folks of Signal Mountain, Tennessee did. Signal Mountain, population 7,500, is the first town in the United States to pass a green foods resolution, a written commitment to local farming and sustainable practices.

Signal Mountain beat out nearby Chattanooga, as well as Chicago, New York, Los Angeles and the rest of the country. To David Cook, who initiated the town’s green foods resolution, coming in first is beside the point.

“We don’t have a choice,” says the teacher and columnist at the Mountain Mirror. “Green food resolutions are going to have to be passed and looked at everywhere.”

Wish the folks gathered in Copenhagen had felt that way.

Farm Sanctuary, the non-profit advocating on behalf of animal rights came up with the idea for the proposal. “We felt it was time to make a statement and make it clear what the profound consequences of our food choices are,” says Gene Baur, Farm Sanctuary’s co-founder, president and longtime vegan. Farm Sanctuary’s website suggests wording for the initiative and ways to build community support. Cook took the idea and ran with it. In an article, he challenged the town council to adopt the resolution. They passed it unanimously.

It illustrates the message Raj Patel puts forth in The Value of Nothing (Picador, $14) — we’ve got to step up, every one of us. “We’ve been taught to sit back and consume properly,” Patel says. It led us into the biggest economic tumble since the Depression.

“We need to be fearless,” says Patel. “We need to take personal responsibilty with government and corporporations. It’s not, ‘If I vote for this dude everything’s goint to be fine,’ it’s ‘There’s half a dozen community groups around my neighborhood I’m interested in and I’m ready to get involved.” If any good can come from this dismal economy, it will come from people “relying on and building community.”

It only took one man’s actions to launch a green foods resolution with townwide support. Okay, no one is going to come out against health, environmental preservation and sustainability, the things the green foods initiative advocates. But Signal Mountain town councilman and former mayor Paul Hendricks aims to turn the resolution’s pretty rhetoric into action.

Hendricks, a longtime Sierra Club activist, says, “We’d like to get a farmers market going here. We have CSA [community-supported agriculture] and some small farmers who do organic farming. The more you can decentralize food growing and energy production, the better it is for the environment.”

Wish the folks in Copenhagen had felt that way, too. Unlike the Copenhagen climate treaty, the Signal Mountain green food initiative “didn’t become highly politicized,” says Baur. “You had folks who cared about the issue” and came together to make it happen.

Signal Mountain and The Value of Nothing are lessons in empowerment and activism. I hope Signal Mountain’s green food resolution inspires other cities and other citizens. It’s a great start, but it’s only one action. Solving the world’s problems “is a complex thing,” says Patel. A single resolution, treaty or act is not enough. “It has to be a bunch of things.”

And they have to come from us. Cook, who teaches courses in democracy says, “So often the lesson my students — and I — realize is that real change is going to take place from below, and rarely from above.”

Together, we can create positive change. It’s time to put our money and our morality where our mouth is. Choose food that sustains us and the planet, that’s produced ethically and transparently. Food that’s green provides greater pleasure and costs less than food that’s morally gray. As Patel says, “The whole idea of The Value of Nothing is it doesn’t take much to open wide the world.” 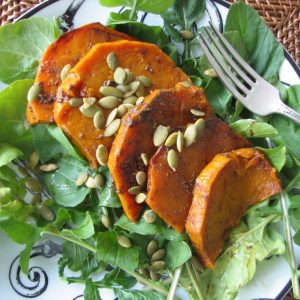 Sweet potatoes’ natural sweetness shines through in this significant salad, without pineapple or marshmallow. Serve warm or at room temperature so the flavors really pop.
Print Recipe Pin Recipe

« My Favorite People, My Favorite Recipes: The Immigrant Cookbook
St. Patrick’s Day Bubble and Squeak (The Eating of the Green) »