So many yummy vegan things are happenings in Miami, including the arrival of one of our newest residents, Eddie Garza. Eddie’s been king of Latino TV these days, and with reason — he takes the Mexican dishes we all love and gives them the vegan makeover they deserve. All the flavor and fun, none of the carne, queso y huevos. Don’t believe me? Just try Eddie’s tacos, where shredded eggplant stands in for beef. The recipe’s Eddie’s new cookbook Salud! Vegan Mexican Cookbook (and, thanks to Eddie, here). You might find it served up at your school or office, too.

Eddie, the Humane Society’s Senior Manager of Food and Nutrition, is working with Latin communities all over the country to help them incorporate vegan versions of traditional favorites into their menus. What’s wrong with traditional? Eddie keeps a photo in his wallet of himself at 300 pounds. He credits going vegan with growing fit and growing compassionate and conscious. He’s lean, beaming and has the vegan glow. Being a runner and yogi doesn’t hurt, either. And the man knows his way around a kitchen. I’m very glad to have Eddie in the 305. 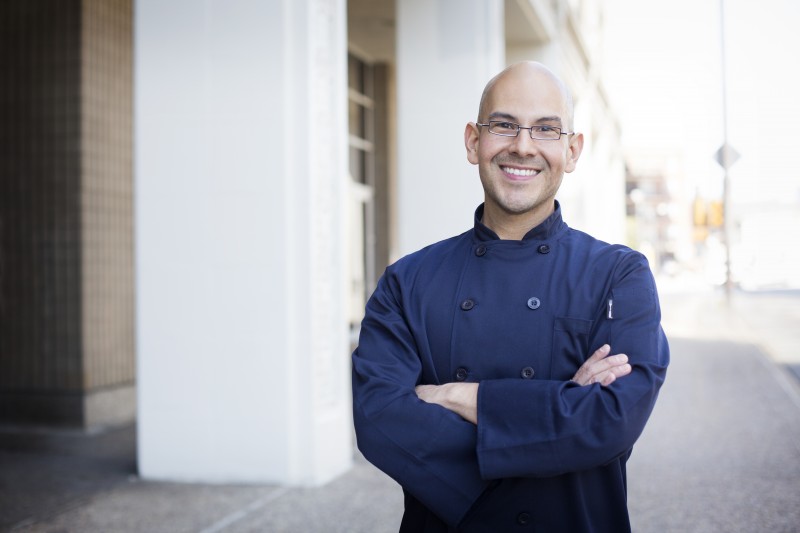 All my favorite childhood memories are ones that take me back to Grandma’s kitchen. It’s where our family always gathered before school and after school and where I spent most of my weekends learning how to cook classic Mexican dishes like moles, enchiladas and, of course, tamales. I also learned a lot about the history and origins of traditional Mexican dishes. Most of the ancient Mayan and Aztec recipes are naturally plant-based, as the staples of Mexico during Mesoamerican times were maize, beans, chilies, squashes and other plant foods.

Modern day Mexican cuisine – the fusion of Mesoamerican and European cooking which is known for its excessive use of meat, lard, and other animal products – is the most exciting to veganize. Mexican food lovers are going to go crazy for my garbanzorizo, an intensely spiced chickpea-based Mexican chorizo that can be used for an assortment of dishes, including as a topper for my Cashew Queso Fundido, a super stretchy cashew-and-tapioca-based cheesy dip that’ll make any cheese lover a believer in the power of plants! Both of these vegan makeovers already got two thumbs-up from Grandma. 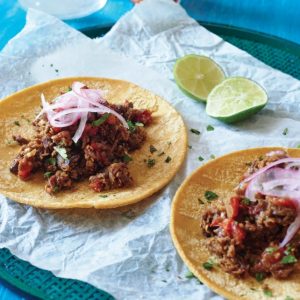 In the cattle ranching regions of Mexico, barbacoa is typically made with meat from a cow’s head—the eyes, cheek, brains, and more. The combination of the mostly unwanted parts gives the meat a texture unlike any other. Since going vegan, I’ve been on a mission to find a good alternative to this traditional Sunday morning meal at Casa Garza. Enter eggplant. A longtime star in the vegan culinary scene, eggplant’s versatility really shines in these perfectly textured ranch-style tacos.
Print Recipe Pin Recipe
Prep Time 15 mins
Cook Time 20 mins

« Gado Gado
Rice in the Sahara – Inviting Everyone to the Table »