With frantic schedules, fast food and frozen entrees, Thanksgiving may be the one day of the year we return to the kitchen. And in so doing, we return to ourselves. We connect with the people who matter in our lives by inviting them to our table for a special meal. We connect to the past by honoring the spirit of that first Thanksgiving — even if you may be wondering what exactly to be thankful for. Perhaps it’s been a sucky year — for you and a lot of others, ace. Unemployment’s at 10.2 percent and a record 49 million Americans have faced food shortages this year. If it’s any comfort, those celebrating the first Thanksgiving had a hard time of it, too.

Back in England, the Pilgrims had been merchants, artisans and land owners. In this wacky new world, they had nothing and no workable skill set.

Fortunately, the Wampanoag, Native Americans who’d been living in the ‘hood, took pity on the inept newcomers. They gave them the seeds for native crops like corns and beans and squash, cranberries and corn and showed them how to plant and harvest them. For the first time, many Pilgrims had to connect to — and depend on — the land. Plymouth suffered drought. The Pilgrims suffered doubt. And homesickness (oh, for the days of religious persecution, social infrastructure and a steady job). And sickness in general. So when harvest rolled around and they were still alive and discovered sustaining themselves might be possible, there was serious reason for gratitude.

The Pilgrims were clear about who to invite — everyone who’d survived, plus the Wampanoag, who’d helped save their collective ass. They were also clear about how to source their food. They went for seasonal and local. That’s all they had. There was no running to the store. There was no store to run to.

According to record, the feast was not the triumvirate of turkey, cranberries and pumpkin pie we know but a variety of roast meats, leeks, watercress salad, msickquatash, corn bread, and wild plums for dessert. Despite its alarming name, msickquatash, a Native American dish, is the forerunner of succotash. However, food historians believe what they ate wasn’t the summertime salad of corn and limas, but an amalgamation of whatever they had on hand — you know, like corn and beans and squash. Msickquatash is basically a term for cleverly prepared harvest stew. 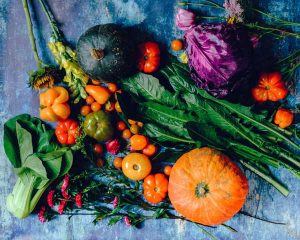 Thanksgiving was not a three-day weekend in November they planned on every year. It was invented on the spot, brand-new and heartfelt. There were no frozen pumpkin pies, there were no freezers, not to mention a dearth of desserts in general, what with sugar being at a premium. And you know what? It was still a great meal.

Armed with modern conveniences the Pilgrims never dreamed of, you’d think hosting Thanksgiving these days would be a slam-dunk. If only. Many of us are as lost in the kitchen as the Pilgrims were when they washed up at Plymouth Rock, and even seasoned Thanksgiving hosts can find the holiday a big, honking pain in the ass. It takes time to make a home-cooked meal in the middle of a busy week. It takes effort to remember and accommodate everybody’s food phobias and emotional baggage. It takes patience to deal with last-minute surprises, whether it’s guests stuck in traffic or roasted vegetables stuck in the pan. And for what? So people can snarf their way through a lovingly prepared meal quicker than downloading porn. Do it anyway.

Thanksgiving doesn’t need to be elaborate. It doesn’t need to be an eat-a-thon. It doesn’t even need to involve turkey (the Pilgrims didn’t have one). Thanks, though, should be on the menu even though, like the first wave of American settlers, we’re struggling through tough times. Giving thanks, especially in the face of hardship, is humanizing, energizing — and free. Make this Thanksgiving meal like the first Thanksgiving, seasonal, sourced as close to home as possible, made mindfully from what we have and served with love and gratitude. 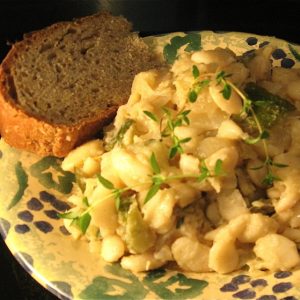 An homage to that first feast, this silky, lemony stew is made with limas, squash and leeks, but the point is to use what’s local and available. Onions make an easy substitution for leeks and you can use any type of bean you like. Canned will get the job done, but the recipe is really better made from dried. Dried beans are cheaper and cook up creamier. No zucchini? Add a few handfuls of watercress (which also appeared at the first Thanksgiving), spinach, collards or any leafy green. Happy Thanksgiving.
Print Recipe Pin Recipe

« Cruise The Mediterranean With The Veggie Queen
MY FAVORITE PEOPLE, MY FAVORITE RECIPES: Jason Wyrick »