The Vegan Taste’s Jason Wyrick wants you to know there’s more to Mexican cuisine than Taco Tuesdays.  “People think Mexican cuisine is one thing,”  he says,“but Mexico is almost as big as the United States and it’s as varied as the cuisine we have here.” That includes tacos, and Jason wrote the book on them, Vegan Tacos, as well as its sister volume Vegan Mexico.

Despite his American-as-anything looks, Phoenix-based Wyrick is Mexican on his mother’s side. The food he grew up eating — and loving — though, was, at best, Mexicanish, like“my mom’s enchiladas.  They were horrible,” he recalls, laughing.  “Layers of tortillas, a bunch of cheddar cheese and chili sauce, with olives sliced on top.” 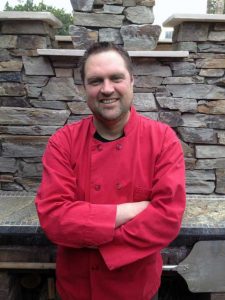 Yummy, perhaps, but at the expense of his health.  Wyrick went vegetarian for ethical reasons, so while he could indulge in his mom’s enchiladas and other cheesy favorites, over time, he gained weight, and worse, was diagnosed as diabetic.  “It was scary, diabetes,”  he says.  And upsetting, since he’d assumed going meatless meant good health as well as good animal karma.

Wyrick  began exploring his food choices. He admits to being a wee bit obsessive.  “When I’m interested in something, I learn everything about it.  When I got interested in food, I wanted to know where does this come from?”  He began cooking for himself.  And he became vegan. He credits both with losing weight and regaining his health.  Wyrick reversed his diabetes through a plant-based diet alone.

Wyrick has sort of gentle professorial/priestly air.  Having immersed himself in the whole culinary process from plant to plate, he wanted to pass on the power of plant-based food to others.  In 2006, he launched The Vegan Culinary Experience, the first-ever vegan magazine and has been a passionate, not to mention gifted, advocate for plant-based cooking.

In his books, he shares plant-based versions of authentic Mexican recipes, but also the regions and roots of Mexican cuisine and the backstory of its indigenous ingredients.  Wyrick is all about low and slow, meticulous research and artisanal craftsmanship.  But he gets that you’re not.

“We’re so time-pressed compared to other cultures.”  That’s why he and wife Madelyn Pryor created The Vegan Taste, a plant-based meal service delivering to Phoenix-area subscribers.  They’ve been at it for 15 years.

Wyrick is now in the process of opening a restaurant called Casa Terra, with — surprise — a Mediterranean-influenced menu. The cuisine might depart from Mexico but the flavors, like musky cumin and the bright flavors of cilantro and citrus, as well as the prevalence of whole grains and beans, belong to both Mexican and Mediterranean cooking.  Wyrick can even explain why (remember the professorial/priestly thing?).  “The Spice Road went through southern China and India to Rome, and it spread across Europe.  Cilantro and citrus are southeast Asian ingredients but they made their way into European cuisine.” 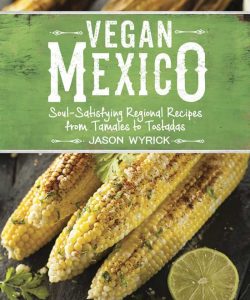 As with his Vegan Taste dishes, his Casa Terra dishes are where flavor and wellness go together, well, like beans and rice.  “I know a lot of non-vegan chefs.  They’re so different,” he says, shaking his head.  “They just want to make great food, that’s all they feel they have to do. I have to make great food but I feel an obligation not to wreck someone’s health because of what I went through.”

He’s even reworked his mother’s enchilada recipe.  It’s still comforting and keeps the olives and cheese but it’s plant-based and draws on truer Mexican influences and ingredients. “It’s more about chilies and flavor.” 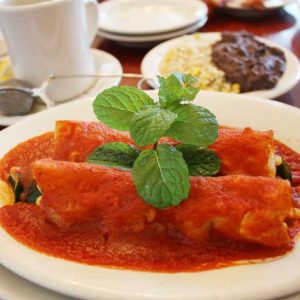 Growing up, my mom would make cheese and olive red enchiladas and they were always the treat of the year. This is my vegan version, complete with a homemade chile sauce. You can serve these rolled or Sonoran style (think lasagna,) and either way is perfectly fine. It’s all about digging into gooey, melty enchiladas.
Print Recipe Pin Recipe