You are here: Home / MAIN COURSE / Chili-Spiked Tofu With Broccoli and Brown Rice

Chili-Spiked Tofu has a lovely Asian flavor with a kick of heat. Adding broccoli and brown rice provides an extra boost of protein and can provide you with enough energy to take down even your toughest opponent.

Daniel Bryan is vegan, but don’t call him Soy Boy. Well, you can, but you might regret it. Bryan is a WWE Superstar, a heavyweight champ who proves you can be meatless and still kick ass.

“I knew I wanted to wrestle when I was little kid. It took hold in me, captured my imagination,” says Bryan. He’d wrestled for years, but went vegan in 2009, when he became part of WWE.

At the same time, he learned he had elevated liver enzymes “and all this other stuff — skin infections and my cholesterol was really high.”

“My health is so much better. I’m bigger now than I was eating meat. My lifts in the gym are better. I’m in better shape. A lot of people thought you couldn’t be a top-level athlete as a vegan, but people like Mac Danzig and Jake Shields are proving that’s wrong. And it’s better for me as a performer,” says Bryan.

“The other wrestlers just think it’s weird. They don’t understand it.” He just smiles. He didn’t need meat to win the 2010 heavyweight championship.

In training, he eats “a lot of Asian food — brown rice and vegetables, salad and protein shakes.” On tour, Bryan packs a lot of his own food, including kale chips, which he makes himself. “My diet is very kale-heavy. It’s so nutrient-dense. I stay away from fake processed stuff.” His big indulgence is the occasional vegan cupcake.

Peta2 named Bryan most Animal-Friendly Athlete, but being friendly isn’t what WWE is about. Wrestling fans have been known to chant, “Bacon, bacon, bacon,” while he’s in the ring. He shrugs it off. “I’m healthier than everybody else. All the omega-3s make me smarter.”

Compassion is a cornerstone of being plant-based, so how does Bryan square that with trying to rip his opponent’s face off? “The duality of man.” A philosophical wrestling superstar? Must be the omega-3s. “I’m pretty much friendly and compassionate to everybody,” says Bryan. “But not to people in the ring.”

Though being vegan put him in touch with his compassionate nature, it also developed his badass side. Once looking like the hulk you bring home to mom, Bryan got a buzz cut and grew a beard and an attitude. Bryan, to use the wrestling biz term, is a heel.

What kind of heel? One who ditched his girl during Wrestlemania XXVIII before he defended his heavyweight title against Sheamus. Um, that might have been a miscalculation. Hey, even a Superstar can be off his game after a breakup.

He’ll be back. He’s already training for his rematch at Extreme Rules on April 29, preparing by “stretching, activating my hips, working my legs,” and fueling up on plant-based protein and complex carbs. “Our lifestyles are grueling. I can’t go back to getting as sick as I was. It’s safer to stay vegan.”

The work is physical, but also mental. “I’m visualizing everything that could happen in the match,” he says. “I’m in there and I’m kicking him as hard as I can.” 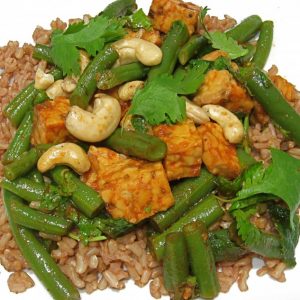 *Available at Asian markets, natural food stores and some supermarkets.