Two ancient foods of the Middle East come together in one creamy comforting bowl. It’s belila, a porridge of barley and dates that’ll up your breakfast game, get you revved about September, Whole Grains Month, and best of all, offer a sweet way to celebrate Rosh Hashanah, the Jewish New Year.

Rosh Hashanah celebrations start with sweetness in the hope of a sweet year to come.  In many homes, Jews celebrate with apples and honey — my family did — but now I follow the  Sephardic tradition of making dates my sweetness of choice.

Dates (botanical name phoenix dactylifera) have been cultivated for thousands of years, and have been part of Rosh Hashanah celebrations for at least that long.

Early fall is date harvest time across the Middle East (and California, too, by the way), and it’s a sweet coincidence that Rosh Hashanah happens at the same time.  Some lucky families can celebrate the new year with fresh just-picked dates — but dried dates are a sweet, sensational Plan B, especially tender Medjools.  They’re the largest and sweetest, and rightly earn their name as the King of Dates. But any variety, fresh or dried, offers a natural caramel sweetness, with a high fiber content that compensates, so they don’t send blood sugar spiking.

In Judaism, dates symbolize good luck. We need that. They’re among Judaism’s seven sacred foods along with

Barley’s the other big belila star.  It’s chewy, high in protein. and out-fibers almost all other whole grains. Barley (botanical name hordeum vulgare) is one of the oldest of the ancient grains, first grown in the fertile crescent. Archaeologists have found mummies buried with necklaces of barley grains — that’s how precious it was. It’s still a huge value add. Barley is a sustainability hero. It’s a non-fussy, low-water crop with a high yield, able to grow in almost every climate and country, from Ukraine to Australia.. Barley feeds us, feeds animals, and fermented, it’s used to make beer and whiskey. There’s a lot to love.

When we’re talking whole grains, we mean it’s a complete grain, with its hull or husk, its protective outer coat intact.  In most cases, that’s what I prefer for flavor, texture and wellness. Whole grains add fiber, which we all need. However, barley’s a tough case. Literally, Whole grain barley, sometimes known as pot barley, has a husk that’s thick, and not terribly delicious or digestible. It also takes up to an hour to cook on the stovetop. Pearl barley, the kind in this recipe, comes with the husk removed. It’s still plenty fiber-rich but cooks in half the time.

Barley doesn’t need much water to grow, but it loves to be cooked in plenty of it. The ratio is one part barley to three cups liquid. Barley drinks up a lot of water, but it gives you much in return. It has a nutty flavor and lovely nubbly texture. Each grain remains intact in cooking, but they plump and expand, offering a bowl that’s naturally creamy.

Belila is a natural at breakfast, but across Egypt, it’s often served as dessert, or as a light evening meal. Nourish yourself with belila any time, but especially now. A bowl of belila delivers a taste of sweetness for the new year, it’s a gentle and delicious way to break Yom Kippur fast, and it’s a lesson in everyday miracles.

For a seemingly simple bowl of porridge, belila turns out to be greater than the sum of its parts. Thirsty though the barley grains are, they seem to expand and multiply as they cook.  A handful of dates delivers a truckload of sweetness.  Perhaps the way barley and dates create a sense of plenty is part of what makes these ancient foods sacred. Belila offers wellness, wow, abundance, sweetness for your mouth and sweet, simple grace for your spirit. Even the name is pretty.

L’Shanah tovah — wishing you a sweet and shining new year. 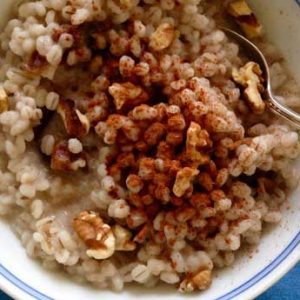 More recipes for the new year.