You are here: Home / MAIN COURSE / Farfalle with Greens and Buckwheat Crunch

The National Animal Rights Conference which takes place this August, has been a gathering point for animal rights advocates since 1981. Its founder Alex Hershaft is also the founder of FARM (Farmed Animal Rights Movement), a nonprofit he began over 40 years ago. I had the honor and pleasure of speaking with this animal rights pioneer as part of FARM’s 40th anniversary celebration.

Alex Hershaft, 82, remembers when animal advocacy was less of a party, when it was barely a movement. “I was a closet vegetarian,” he says with a laugh. “I kept it to myself. I felt there was something wrong with me.”

Even as Hershaft threw himself into the social justice initiatives of the 1960s and ‘70s, he felt like an outsider, unfulfilled. Then in the mid-1970s, a chance encounter led to him to attend a Vegetarian Society event. He came away “enthralled, vindicated. I could come out of the closet.” And he realized, “Maybe this is the new social justice movement for me.” 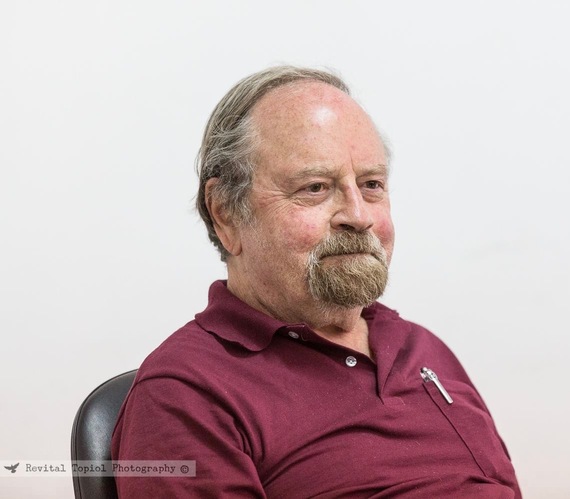 Social justice is central for Hershaft, a Holocaust survivor. His activism has been shaped by two Singers — Princeton philosopher and abolitionist vegan Peter Singer, author of the seminal book Animal Liberation and award-winning Nobel author Isaac Bashevis Singer (Polish and meatless like Hershaft) who wrote, “When a human kills an animal for food, he is neglecting his own hunger for justice. Man prays for mercy, but is unwilling to extend it to others.”

Hershaft, who serves on the Advisory Council of Jewish Veg, calls it “the cult of victimhood. Many Jews subscribed, including my own mother. We have suffered and therefore we are now empowered to cause suffering to others.“ In working to protect animals, Hershaft also aims to protect humanity. He’s made FARM’s mission to end killing animals for food. Period. That’s also the goal of the Animal Rights National Conference.

When a human kills an animal for food, he is neglecting his own hunger for justice Click To Tweet

Now the idea of an animal rights conference may seem like no big deal, but when Hershaft began it 25 years ago, it was radical. He wanted to gather all who care about this issue and how it affects us personally, morally, globally, so no one needs to feel as alone and alienated as Hershaft once did. For people united around accomplishing the same goal, keeping the dialogue going between the various factions is challenging. There are a hundred speakers and about as many agendas. “People get entrenched in their various positions. They disagree and fight.” Several years ago, mainstream groups took offense at a militant presenter. “They walked out of our conference.” He pauses and smiles. “They’re back now.”

Having devoted half his life to animal advocacy, Hershaft says, “There are many ways to accomplish our goal. My own philosophy’s evolving constantly.” Try Meatless Monday. Join animal rights and vegan organizations (um, like FARM). Invest in vegan food innovation or just stock up on veggie burgers. Any way you get there is good.

With the advent of the internet and social media, FARM’s messaging is more sophisticated and reaches more people than ever. Yet Hershaft feels a wistful longing to see people returning to the gatherings and grassroots activism that energized him when he began FARM. He appreciates the power of the virtual, but he cherishes the real. A party for FARM’s 40 birthday seems just the right choice for the man who started it all, a way to celebrate the animal rights movement’s beginnings and its future and a way to bring everyone together. 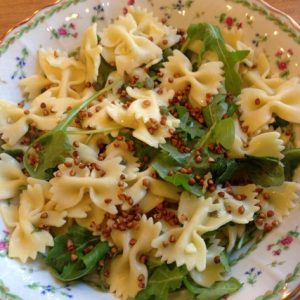 Farfalle with Greens and Buckwheat Crunch

This recipe offers a different spin on classic Polish kasha varnishkes, a Rosh Hashanah favorite. It doesn’t break with tradition entirely. It relies on the old Italian trick of saving some of the water used for cooking the pasta and adding it to the sauce. The water retains some of the starch from the pasta and makes everything silky.
Print Recipe Pin Recipe