Meanwhile, there’s America, which has grown not newer but older (and not necessarily wiser), times have gotten harder and the planet has grown even hotter. “There’s now more CO2 in the atmosphere than there’s ever been while humanity has been on this planet. We are destroying the basis of life on earth as a result of growing the economy — what we call as business as usual.” This is not the vision of our country Robbins put forth in “Diet for a New America,” or DNA, as he calls it. “It is,” he says, “the definition of an insane society.”

Robbins does not sugarcoat. After all, he walked away from the Baskin-Robbins ice cream fortune because he saw the dairy industry’s image of happy cows and happy farmers hid “an embedded corporate agenda that is toxic to the earth, to the farmworkers and produces food toxic for the people who eat it.”

Amazing and inspiring as he is, Robbins alone can’t compete with the corporate food machine’s money, PR noise campaign and political influence. Being vegan is great, so is green energy, but human energy counts, too. That’s what’s behind the Food Revolution Network. This initiative, which he and his son Ocean created two years ago, continues DNA’s mission (and subtitle): “How Your Food Choices Affect Your Health, Your Happiness and the Future of Life on Earth.”

It also brings people together.

“We had people entering from different doors but coming into the same tent of food activism,” says Robbins. “There has been such rigidity and one-upsmanship in the food movement — raw foodists saying, ‘I’m better,’ people being more vegan than thou or more Paleo than thou or ‘Atkins is better than Sears.’ So many ways people fight.”

It hasn’t helped the food activism cause any. We can’t afford infighting and divisiveness. There’s too much at stake. “The food industry really preys on people,” he says. “They will control you, use you, chew you up and spit you out.”

“The food industry really preys on people,” he says. “They will control you, use you, chew you up and spit you out.” Click To Tweet

Whether you’re concerned about health, GMOs, animal rights or the future of life on earth, it’s time to come together “to create change at larger, systemic levels.” Changing to a happier, healthier world is possible, he believes. “Nelson Mandela once said people always think things seem impossible till you do them.” But it will take all of us. “It’s thrilling to be connecting with so many people,” he says. “I’m hoping the network can be a bridge-builder.” 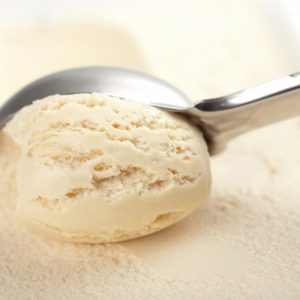 Two ingredients, five minutes, no unhappy cows, no unhappy you. There’s no need for an ice cream freezer, either. Sweet yet sugar-free, amazingly creamy, yet dairy-free, this is the sweet answer to your summer.
Print Recipe Pin Recipe