An American Vegan in Spain

Spain, with its rich history, dazzling art and passionate people, is a wonderful place to be. But not an easy one for a vegan. Spain is the home of Miró, but it’s also home to museos de jamon — ham specialty shops — on virtually every street corner. There’s ham on every menu. And bacalao — salt cod — and morcilla — gahh— black pudding, and every sort of food that isn’t plant-based. Spain encourages you to unleash your inner testosteroney Anthony Bourdain and eat nothing but the nasty bits. You could pass out for want of a leafy green vegetable.

I’ve made a few meals out of granola bars since coming here. I’ve also made some wonderful discoveries. Some in restaurants, but the best ones have come about in the kitchen working — and playing — with other cooks. Spain has a great pride and centuries of cuisine and culture they want to share.

If pig is Spain’s national dish, paella — saffron-infused rice — is a close second. At Madrid’s cooking school, La Cocina de Babette, we made a paella altogether more refined than any version I’ve ever had in the states — and plant-based, besides. This paella gets its hint of briny flavor not from the usual seafood, but cochayuyo, a kind of seaweed that’s big in Chile and fun to say. It’s fun to eat, too, with a mild taste, meaty, mushroomy chew and no weird slime thing as with some other seaweed varieties.

We also made three traditional cold Spanish soups — no-cook, no-meat quickies you can do in a blender. You think raw food is cutting edge? Think gazpacho. Think ajoblanco, or white gazpacho. It’s velvety and luscious and made with few ingredients — almonds, bread, garlic, vinegar and olive oil.

The class was a happy combination of instruction and an easy, warm afternoon in the kitchen of a friend. At the end, we popped open a bottle of cava and sat down, along with La Cocina de Babette’s director, to enjoy the vegan delights we’d prepared. The director and the teacher aren’t vegan, but they’ve wanted to do more alternative classes, including this one. They’ve been offering it for five years. I was their first student.

Okay, Spain’s still kicking around the vegan thing. But it’s game. You’d have to be to invite some strange vegan American girl to dinner. In Barcelona, a passionate Catalan cook honored me by including me at his gastronomic society feast.

A Basque tradition, these culinary clubs are historically only for men. Men cook, women aren’t even allowed in the kitchen. And the Basque menu is such that vegans aren’t exactly welcome at the table. But rules are made to be broken. On a rainy night in La Ribera, Barcelona’s old, walled, cobblestoned neighborhood, my host welcomed me to Euskalzaleak. This translates into something like deeply loving the Basque culture. It’s best pronounced if you’re Basque. Or drunk. (He poured vino tinto freely).

He set out your usual Catalan crowd-pleasers — bacalao, jamon and other animals, and a dozen guests tucked in. But just for me, he prepared fresh pasta with locally foraged porcinis, just now in season. Like ajoblanco, it’s a simple dish, yet intense, elemental and earthy. He does not get the vegan thing. But he has a fierce desire to please, a desire to feed. I was so touched he did this for me, I kissed his hands.

For a moment there, even the meat-eaters looked envious. Then they went back to their jamon.

I have seen a lot of ham in Spain. But in the kitchens of passionate cooks, I have also seen a lot of heart. Now if I could only get my hands on a head of kale. 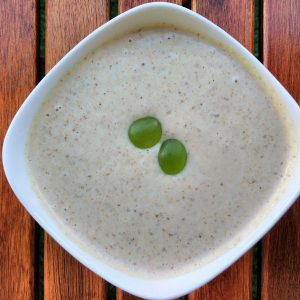 recipe from La Cocina de Babette Ajoblanco is considered a summer soup. However, the ingredients — almonds garlic, olive oil, vinegar — are not seasonal. It’s a gutsy soup to be enjoyed any time and a brilliant use for stale bread, besides.
Print Recipe Pin Recipe

*Why peel the almonds? For looks and flavor. Peeling the nuts’ dark, slightly tannic skin makes for a white, creamy, slightly sweet soup. And it’s fun and easy to do, once you know the trick. Pour almonds into a small heatproof bowl. Cover with boiling water and leave for 15 minutes. Drain. Pinch almonds between your fingers. Skins will slip off off, leaving you perfect, pale bare nut kernels.