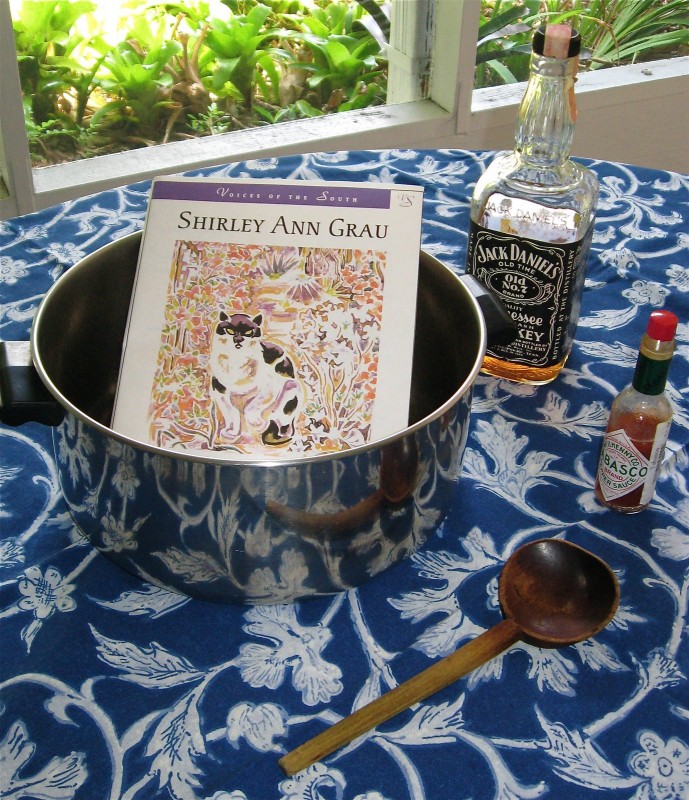 Once upon a time, there was a Pulizer Prize-winning author, a woman who drank Jack Daniels, shot ducks and wore diamonds with equal nonchalance.  Her name is Shirley Ann Grau and she was my magical guide around New Orleans a few years back.

“I’m quite a dull, conventional person,” she warned.  This was a lie.

She picked me up in a long maroon car which in burnished memory was a Cadillac, treated me to a fancy lunch (I don’t recall the food, I do recall the wine, the warm glow of chardonnay in the glass) and showed me the sights, including New Orleans’ system of pumping stations and levees.  They lacked her glamour and talent to fascinate but, she said, “One of these guys breaks and it’s all over.” This, which she told me six months before Hurricane Katrina, turned out to be true.

Grau, now shy of 80, had lived by herself in the French Quarter in her 20s.  After her 1955 debut story collection, The Black Prince, the Klan burned a cross on her yard.  Or tried to. “They had forgotten to bring a shovel,” and her hard-packed ground would not yield.  “They had to lay it down,” she recalled.  “It was kind of silly.”

In 1965, she won the Pulitzer for The Keepers of the House, a novel confronting race in a way genteel white women weren’t supposed to do.  She’d stared down every hurricane of her life by staying put, a bottle of Jack Daniels and a shotgun by her side.  Until Katrina.

Shirley waited until mandatory evacuation, then loaded her dogs into the car and took off for Houston, where her daughter lives.  When we spoke shortly thereafter, she reported her house was ruined, the manuscript she’d been writing was lost.  On the upside, her dogs were fine, she had a new wardrobe since she’d fled like a refugee without so much as a change of clothing, the weather in Houston was lovely and she had plans to see Eugene Onegin.

“It isn’t my favorite opera, but what the heck, it’s civilization.”  She sounded close to her tough, resolute self but before we hung up, she confided she felt “like hell.”

After that, she took off like the character Baby in her 1994 novel Roadwalkers.  She vanished, or seemed to.  I’m hoping she’s back in New Orleans or has set down roots in Houston.  I’m hoping this gumbo can call her to the table from wherever she is.

Gumbo is a dish rich in tradition and soul and everyone thinks they make the best.  Some add file’ (sassafras powder) as a thickener, some add okra, many eschew both.  I don’t see how you can make an okraless gumbo, since gumbo gets its name from the Bantu word nkombo, meaning okra.  With a bit of acid (lemon juice or vinegar), okra has no slime factor. It’s rich in folate, fiber and vitamin A.

I added a pound of collards because they’re growing out of control in my garden.  You can add the same amount of duck, shrimp, andouiille or crawfish.  It’s pretty nervy of this Miami girl to make gumbo for Shirley, but she’ll appreciate the nerve, if not the gumbo. She’d no doubt add crab, duck or even squirrel she’d bagged herself, and if that’s what you like, I’ll show you how to do it.  Still,  I hope this vegan version sums up her spirit.  Serve over rice.  Keep the Tabasco handy.  Also the Jack Daniels.