I’ve never had the honor of cooking with Paula Wolfert, whom I credit in Feeding the Hungry Ghost, but it feels like I have. She’s practically a cult for me and legions of others. I first discovered Paula in an issue of Food and Wine when I was a new bride living far from home in Tokyo. As a gaijin — foreigner — the locals treated me graciously but with Japanese restraint. Paula’s Moroccan recipes were — are — anything but. They introduced a riot of flavors a world away from Japan’s minimalist, elegant food scene at the time. Even the images — bubbling tagines, Marrekesh’s labyrinthine souks with stalls overflow with sacks of spices and grains — promised a bold, bountiful, vivid cuisine I was desperate to try.

Thanks to her, we all can. Paula gave us not only authentic regional recipes but showed us palate-dazzling ingredients like tart pomegranate molasses and soumak and pungent preserved lemons. With her nine books starting with Couscous and Other Good Foods of Morocco and including the James Beard Award-winning Slow Mediterranean Kitchen, she paved the way for today’s hot Israeli food trend decades before Yotam Ottolenghi, Michael Solomonov and Alon Shaya (all Beard winners, themselves). 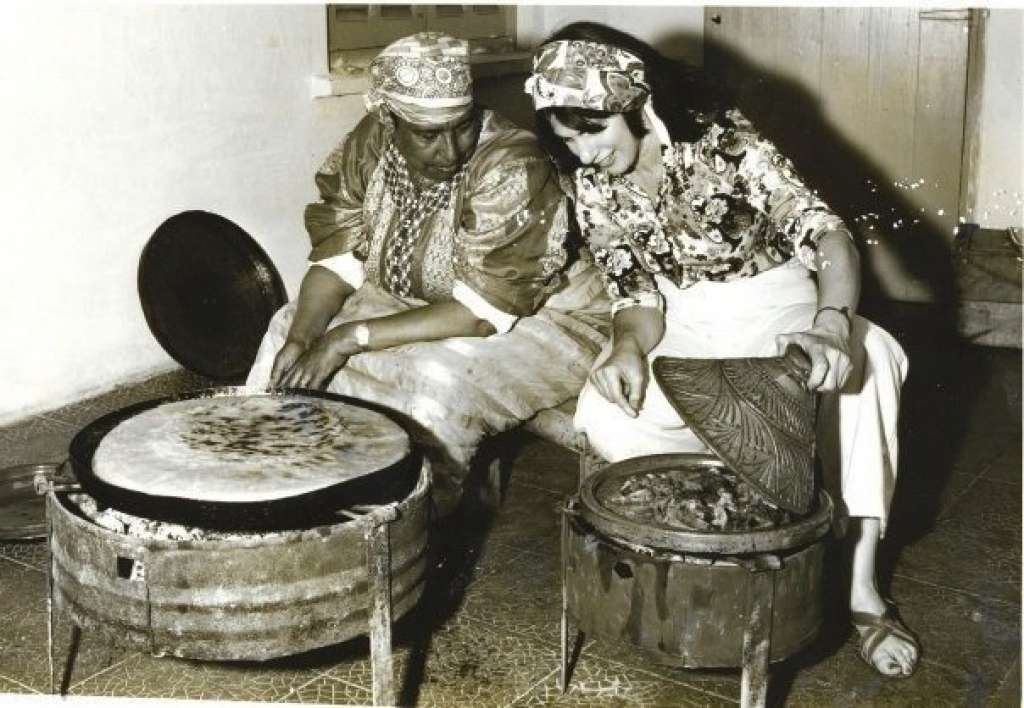 Trending was never Paula’s thing. While most food writers were covering France and Italy to a fare-thee-well, she looked the other way. “I wanted to know what’s over there,“ she says during a recent FaceTime chat. “I touched on things people didn’t do.” Fearlessly exploring the cuisines and culture of Morocco and the Mediterranean was Paula’s magic touch. She gives a taste of the Other.

She shaped me and inspired me as a food writer long before I interviewed her for Palm Springs Life and Culinate. I hadn’t expected her Brooklyn accent and attitude and long, looping talks that were culinary and cultural adventure of their own. The accent and attitude she never lost. What she started to lose, about a decade ago, was memory. In Unforgettable Paula,

New York Times food writer Kim Severson describes how Paula’s palate and comprehension have diminished over time, but Paula remains herself. Once a week, she FaceTimes with other dementia sufferers, aggressively pursuing a cure. “I’m a warrior, not a worrier.” Though at 79, she has no interest or intention of writing another cookbook — “The words float away from the page” — she’s still an inspiration.

As we dish about food and publishing during another long and looping conversation, she laments a certain sameness and safeness in food writing these days. What’s missing, she says, is spirit. Our FaceTime chat kindled that spirit in me all over again, helping me find my way back to what I love about food writing and developing recipes, that sense of pulling you, the reader, into the kitchen to dip a spoon into something new and delicious. When I tell her, she breaks into a face-splitting grin. “God,” she says, “I still can help people.”

I’m beyond excited to feature Paula in My Favorite People, My Favorite Recipes. Thank you, Paula and thank you, Emily Thelin for granting permission to include Paula’s seminal Moroccan ajvar recipe. It’s one of Paula’s favorites and one of mine, too, bright with peppers and eggplant — the produce of summer. Slather it on flatbread, use it to add Moroccan magic to grains, pulses and roasted vegetables. I usually eat it straight from the jar. 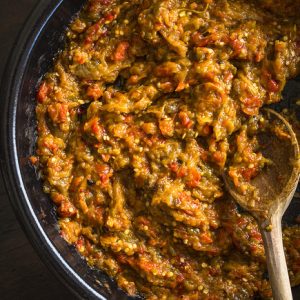 Proust had madeleines; Paula Wolfert has eggplants. Her love of nightshades was seeded in her childhood, and this is her best guess at her grandmother’s recipe for a Balkan eggplant spread she often made when Paula was growing up. Tangy and only faintly garlicky, it’s an ideal accompaniment to just about anything: grilled skewered meats (like the sausages that follow), grilled fish or vegetables, or spread on bread in a turkey or tofu sandwich. —Emily Kaiser Thelin Excerpted from Unforgettable: The Bold Flavors of Paula Wolfert’s Renegade Life
Print Recipe Pin Recipe

« Farfalle with Greens and Buckwheat Crunch
Hot and Wild Rice »