You are here: Home / Culinate / Interview with Paula Wolfert

Originally posted on ” The Culinate Interview”.

Paula Wolfert started out as a rebel, “a beatnik,” as she says. Now she’s the keeper of the flame for the culinary traditions of Morocco and the Mediterranean. Wolfert, who studied with the Cordon Bleu chef Dione Lucas, lovingly traces each region’s cooking back to its sources, from her first book, Couscous and Other Good Food from Morocco, to her ninth, last year’s Mediterranean Clay Pot Cooking. While she evokes the romance of each place, Wolfert is still a tough Brooklyn girl at heart, making sure recipes like Tuscan quail with red grape sauce (from 2003’s Slow Mediterranean Kitchen) work for home cooks in Trenton. Recently returned from a trip to Morocco, the Sonoma-based author is back in her kitchen updating her first book, still in print since it first came out in 1973. 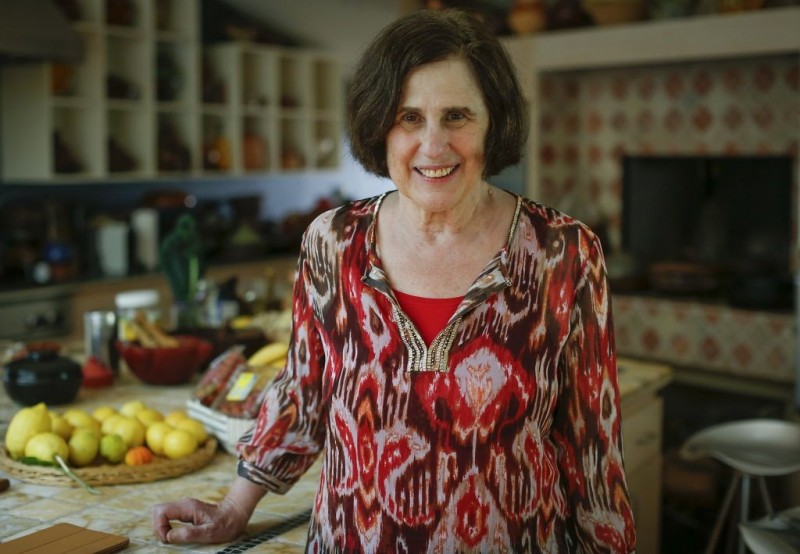 What made you interested in culinary tradition? It spoke to me. I was a beatnik living in Tangier. I was interested in the Other; that’s why I fell in love with Morocco. Moroccan cooking is bottom-up cooking, it’s different. It’s what I had to learn when I lived there. You derive flavor by light caramelization rather than browning, because clay pots can’t take fast cooking. That’s what Moroccan cooking is all about, using the pot over and over again — its own flavor builds. It’s a very passionate way to cook.

In Mediterranean Clay Pot Cooking, you talk about the power and passion of cooking in clay, from Moroccan tagines to Turkish guvecs. Was Tangier where you first experienced clay-pot cooking? No, New York! \[Laughter.\] When I studied with Dione Lucas, she sent me to Fred Bridge’s to pick up some knives. While I was there, I saw this clay pot with a little tiny hole at the top. I said, “What is this?” “A tripe pot.” I said, “What’s tripe?” I bought it because I loved the look of it. It’s huge. I’ve cooked tripe in other pots — I have over a hundred — but not that one.

You’ve said it takes you five years to write a cookbook. What’s involved? I don’t write cookbooks like other people do. I give the publisher a list and then I don’t follow it. But in my travels, I find other things that interest me more, then I have to juggle and shift things around. I’m erratic. That’s why I need an editor. With my first book, the Moroccan government put me in the home of a woman who had been the chef of Mohammed the Fifth. They paid her for the food. People would feed me information about the culture and the food. I thought that’s how you wrote cookbooks. You don’t. But I learned a lot in Morocco, about how people interact in the kitchen. Recipes come through friends. I get the names of people who are famous locally for different dishes. I track them down and tell them I’m coming, am planning my trip, and would love to spend some time with them. I always bring presents — lately, it’s garlic peelers, I buy ‘em by the dozen from Cutlery and Beyond. I carry them with me, kiss the women on each cheek, touch my heart, and give them a gift. I go to their houses; they teach me their recipes and tell me their stories.

What makes a recipe book-worthy for you? Sometimes the recipe is about a person, sometimes it’s about a culture. There’s a recipe in Clay Pot that’s also in Grains and Greens — Swiss chard stuffed with corn. In Grains and Greens, the woman who tells me about her dish talked about how she had to go to a spa after she finished making it. It makes everyone want to eat it. In Clay Pot, in order to reframe the recipe, I write more about corn and anchovies being part of a staple of the local diet. I work it into the culture.

That’s what I like best about your books — they’re not just recipe compilations, they’re knowing guides to magical places. I fell in love with Morocco from reading you. You made me want to go there. I don’t come from these cultures; I’m coming as an outsider. I’m earthy, I’m instinctive, I understand people. I allow myself to explore on many different levels. I talk about flavor and food, but also about culture. In Morocco, magic is huge. It was huge when I lived there. When my husband left me for some blond ice goddess from Sweden, I was left in Tangier with two kids. A friend took me to a sorcerer’s. He gave me some herbs, some stuff, said put it in your bra, wear it for 24 hours, then throws it down the toilet. I did it. It doesn’t work. \[Laughter.\] But there’s a side to everyone where they believe in magic. Like couscous — it doubles, triples, quadruples each time you steam it. It’s always enough food to feed everyone. That’s magic.

Did you ever have the recipe that got away, one that just wouldn’t come together for you at home? There’s always one recipe that takes me forever. Getting it to work, that’s what makes it interesting to me. The warka \[Moroccan pastry\] was like that. It took three months. They looked great, but they’d tear or they’d toughen. It was all about the flour. Moroccan chef Mourad Lahlou \[of San Francisco’s Aziza\] helped me work on the right flour. Only when I used a certain percentage of protein in the flour was I able to develop a recipe. That’s the fun.

Was it warka that made you want to revise Couscous after all these years? In 1973, there were no tagines here — I had to adapt everything for Le Creuset pots. There was no food processor. You couldn’t get any of the herbs and spices here; people didn’t know what you were talking about. There are a new introduction and a hundred new recipes. There’s the warka and one recipe I never put in the first book — Moroccan lamb liver salad. I’m going to get a better recipe. There’s a corn couscous recipe from before I couldn’t get them to publish — it’s a very famous dish and it’ll be in the new book. The recipes will all be retested using tagines and the right ingredients now available today. If you own the old book, I’m going to make it so you want the new one. It’ll come out in 2011. [[block(sidebar). h1.Featured recipe

We do have more and better ingredients and equipment than when you started writing. How else has the food culture here changed?
In the 1950s, no one was interested in food. It’s huge now. It’s never been like this. When I was a kid halfway through college, I get engaged to this Harvard man. I’m at Columbia, I’m studying with Dione Lucas. I’m at some party and someone says, “What do you do?” “I’m trying to be a chef.” I swear to God they turned their backs on me. I was the most uninteresting thing in the room. These were the people who were going to make things happen in the 1950s, and they turned their backs on me. Now get me in a room of Harvard grads and I’m the center of attention, but back then, that was the attitude toward anyone who wanted to cook.

Now we’re food-obsessed — the Food Network, food blogs, etc.
Who has the time to read a hundred blogs? The Food Channel I haven’t watched in years. I used to watch Mario Batali. Now all the shows are about the people, they’re personality shows. I watched Rachael Ray once or twice — she doesn’t interest me. I’ve never watched Paula Deen. I’ve seen Tyler Florence and Alton Brown — he did some things in clay. But I wanted to have it on paper, rather than watching it. What you can get in books are stories. In a cookbook, there’s romance that there isn’t on the Internet.

For all our interest in food, there’s still a lot of people who don’t cook much. What’s your advice to them?
Clay-pot cooking. Put it on top of the stove and forget about it. It’s long cooking, slow cooking. I love to cook this way. I love the control, I love the flavor. It’s what you want out of food.