You are here: Home / BREAKFAST / Cupid, Psyche and Homemade Granola 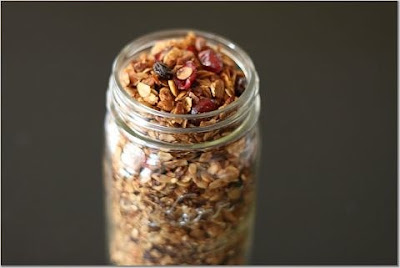 Cooking is easy, blogs are hard, at least for me. Not the writing part, the making pretty part, the layout part, the getting text and images to work within the confines of the stupidass template part. A blog muddle yesterday put me into meltdown. Undoing the mess seemed impossible and not even worth trying. And somewhere during my blackest moment, I remembered Cupid and Psyche.
According to Roman myth, Cupid, the god of love, was the extremely gorgeous son of the extremely gorgeous Venus, goddess of love and beauty. Now, you’d think being hot and having a hunky son would make for Venus a pretty fine life. Alas, she was as jealous as she was beautiful — your basic hardass mother-in-law.
Along comes Psyche, a mere mortal but sweet and lovely and Cupid fell for her, what can you do. He wooed her, but had to do it covertly. He explained that in accordance with the Roman gods’ policy, he could not reveal himself to her as his godly splendor would overwhelm her. Trust me, I’m a god, he says, and she buys it.
They have sex in the dark and it is awesome. So awesome, Psyche couldn’t keep the good news to herself. She ran to dish with her sisters.
If Venus was jealous, so were Psyche’s sisters. But rather than come out and say they, too, wanted fantastic sex, they sowed those wretched seeds of doubt. If this guy is so hot, they said, how come he won’t let you see him? He’s probably a Gorgon and he totally lied to you.
This did not sit well with Psyche. So the next night with Cupid, right after the sex, he fell asleep as usual (gods, men, they’re all alike), and rather than snuggle up with him as she’d done in the past, Psyce lit a candle, the better with which to view him. The light showed him to be more lovely than anything she could imagine. She went into some kind of rapture, during which time a drop of candle wax melted, splattering onto Cupid’s shoulder and waking him up.
He let out a godly yelp, waking his mother. Bad news. She comes in, catches Cupid and this girl and freaks out. She can’t get mad at her adorable son for skanking around, but she sure can take it out on Psyche. She dumps the girl into a basement piled high with grains, all different kinds in one massive pile — wheat, oats, millet, rice, barley, whathaveyou, all mixed up.
Venus says, here, bitch. You wanna see loverboy again? Sort these out. By morning.
Well, that seemed a bit harsh, but Venus was a goddess, Psyche hadn’t trusted Cupid as she’d promised to do, she didn’t have a lot of leverage. The impossibility of ordering these teensy little grains on top of all the trauma she’d already experienced quite undid Psyche. She did what I did yesterday during my blog crisis. She cried.
She cried to break your heart — even the ants (where there are grains, there are ants) took pity on her. So they crept out in a nice little line and sorted the grains into nice orderly piles.
Oddly, the myth does not say if Psyche was grateful and vowed never to kill an ant again, but it does say Venus showed up the next morning, and instead of seeing Psyche hysterical, found her happy and smiling, task completed. Venus had to suck it up. Cupid and Psyche were reunited, got married, lived happily ever after, that sort of thing.
I wish I could tell you some sympathetic insects helped sort me out yesterday. If only. But coming back to it fresh today, I found a way to fix what had been so hopelessly muddled, and that seemed magical enough for me.
Looking for a food tie-in? Here it is — granola, that amalgamation of grains and fruits and nuts. They do not need to be separated into piles, they’re much happier together.
For a really happy-making experience, make your own granola. It’s cheaper than the commercially-made stuff, has even more flavor, less fat and sugar and all the goodness of oats’ cholesterol-busting beta-glucan plus love.
DIY Granola
This is a basic blend. Once you see how it is to make, go wild. Cut back on the coconut and add afew tablespoons of wheat germ, flaxeeds meal, pumpkin or sunflower seeds for extra goodness. Substitute other dried fruits for the raisins and cranberries, add walnuts, pistachios or pecans instead of the almonds, combine at will.
4 cups old-fashioned rolled oats
1 cup almonds, coarely chopped
1 cup dried unsweetened shredded coconut
1/2 cup honey
1/3 vegetable oil
1 cup raisins
1 cup dried cranberries or chopped dried apricots
1 tablespoon cinnamon
1 pinch sea salt
Preheat oven to 250. Line a large rimmed baking sheet with foil or parchment paper. Moisten foil or parchment with a spray of oil.
In a large bowl, toss together oats, coconut, nuts and cinnamon. Pour in oil and honey and toss well to coat.
Place mixture on baking sheet and bake for 30 minutes. Stir with a spatula. Continue cooking for another hour, turning mixture every half hour, until granola is golden brown, toasty and crunchy. Remove from oven and stir in dried fruit and salt. Let cool completely.
Makes about 10 cups. Store in airtight containers. Keeps for 1 month