You are here: Home / VEGAN OF THE MONTH / Vegan of the Month – Brian Patton (the Sexy Vegan)

Not too long ago, the Sexy Vegan (real name Brian Patton) was an overweight, junk food-addicted Trekkie. Now, he’s a vegan vid sensation and author of the new cookbook, The Sexy Vegan Cookbook (clever title).

Seven years ago, Patton was a self-taught cook cheffing at a cafe. The cafe wasn’t vegan and at the time, neither was he. He was “260 pounds. I was a big, round, blubbery guy. I smoked and drank all the time. Not that I don’t drink any more, but back then, it was all the time.”

Meanwhile, some friends opened Vegin’ Out, a vegan food delivery service. On his day off, Patton would come over with a couple of bags of fast food, chow down, then help prepare “all this awesome, healthy food.” These guys were his friends, they cut him some slack. But even in his burger-and-fries haze, Patton realized something was wrong. “I’d look at these people being healthy, but I’m drinking a 32-ounce soda, burger, fries. I thought I could only get better by getting vegan.”

His plan: go meatless for a month, get in shape, “then I’ll go back to eating steaks and all the stuff I love.”

Turns out he liked being vegan. “I started for health,” he says. “It was the environmental, social, ethical part that kept me vegan. Aside from feeling awesome, another being didn’t have to die this horrible death for me to survive — this just makes sense.”

So with the Sexy Vegan as a joke alter ego, he posted some vegan cooking vids with modest production values on YouTube. He developed a fan base. They love his recipes. They love his dude ‘tude.” “I throw in a dick joke — people like that.”

But beneath the naughty patter and the plant-based pizza demos lurks a guy with a serious mission. “I’d wanted to do something of value, something that affects people positively, but I didn’t know what that was. Cooking at the restaurant wasn’t enough — it felt frivolous in some ways. When I found veganism, I found the value,” says Patton, now Vegin’ Out’s executive chef. “It’s my job, I get paid for it, but I’m promoting a healthy environment, healthy people, I can do good stuff and whatever.” And he does it with his balls.

“My Balls” — the Sexy Vegan’s signature meatless meatballs recipe — “serves the world. It shows the world a better ball, a ball that can have a lot of flavor and also a lot of nutrition, without hurting any animal or doing bad things in the environment,” says Patton. “Eat ‘em in pairs.”

This summer, the Sexy Vegan is marrying the woman he refers to in his book as the Girlfriend, and he’s going to look his sexy best. To make wedding weight, he’s specializing in eating salad — not frothy salads that leave you feeling virtuous but famished, but Sexy Vegan salads, like Curry Fried Tofu.

“You need variety,” he says. “You should not deny yourself stuff — you’ll get bored. Have a piece of chicken fried seitan but surround it with broccoli or kale or something that compliments it. Have balance on your plate. “

Patton is still a Trekkie, a pizza fan and a dude, but he’s something more, too. “I feel better now. I’m more of a complete person. When I became vegan, this puzzle came together — that contributes to anyone’s sexiness. When they understand themselves, feel good in their body, they put good feelings out into the world,” says Patton. “That’s what makes someone sexy.” 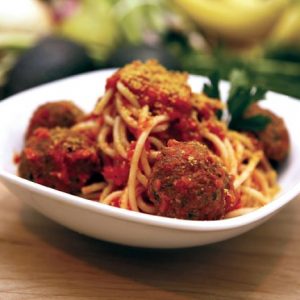 From The Sexy Vegan Cookbook by Brian Patton. Here they are! For the whole planet to behold ... My Balls! You can place them atop a pile of spaghetti or line them up in a hoagie roll, smother them with tomato sauce and your favorite vegan cheese, and bake for a killer ball-parm sando.
Print Recipe Pin Recipe