You are here: Home / MAIN COURSE / Dengaku and Oshitashi

As a devoted member of the vegan tribe, I always wonder about the best way we can get our message across. Frankly, I worried Forks Over Knives wasn’t it. I’m totally behind its premise — going vegan beats heart surgery — but it doesn’t make for light, crowd-pleasin’ entertainment.

“The science,” however, “is rock-solid.” So says Dr. Caldwell Esselstyn, Cleveland Clinic’s head surgeon and author of Prevent and Reverse Heart Disease. He prescribes what he calls “plant-based nutrition” because he’s seen it “not only prevent cardiovascular disease but treat it, stop it and reverse it.”

Forks Over Knives traces America’s growing health and obesity crisis over the last half century. It also traces Esselstyn, who chaired the Clinic’s Breast Cancer Task Force, and T. Colin Campbell, author of the seminal The China Study, both of whom were separately doing studies concluding the dangers of meat and dairy. 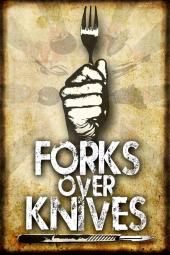 Esselstyn’s 20-year study traced breast cancer in Kenya and prostate cancer in Japan. He watched the numbers shoot from low to high as the population moved from a primarily plant-based to a more meat-centric diet. It convinced Esselstyn, who’s been vegan for over 20 years. He doesn’t call himself that. He just doesn’t eat meat. Or dairy. Or eggs. Or oil. “My own dad had a heart attack at 43,” he says. If the film’s silver-haired star seems hard-core, it’s because he’s seen the numbers, and has been on the front lines of heart disease, cancer, diabetes and death.

So have his patients, several of whom appear in the movie. They’ve gone from seriously sick to meatless true believers. He doesn’t just tell them, go plant-based or die, he’s hands-on. “We have an intensive counseling session of five hours — the same length of time the surgeon has with the patient asleep. We prefer to do it with the patient awake.” And without scalpels, stents or sutures.

“It’s the most significant interchange a patient has ever had with a caregiver — the patient can become the locus of control. It’s so gratifying — those with chest pains and angina suddenly see within two or three weeks their chest pain has diminished or gone away,” says Esselstyn. “The reason we’re able to succeed is we echo back to the basic covenant of trust that should exist between caregiver and patient and has since the days of Hippocrates.” Hippocrates was the Greek guy who said, “Let food be thy medicine and let thy medicine be food.” Of course that was around 400 BC. Fast forward to today. “Nutrition is the strongest tool in our toolbox,” says Esselstyn, “and it isn’t even being taught in medical school.”

How does his message go down with his fellow physicians? “They say, Ess, you’re so extreme.” Esselstyn laughs. “They accept the science is accurate, but they’re imbued with the belief patients will not follow this program.” Does not eating meat or dairy seem limiting? Well, honey, death is pretty limiting, too.

Heart disease is America’s number one killer. Half a million people each year undergo surgery for heart disease. It costs this country over $500 billion last year. And the traditional western med approach to treating it — “stents, bypasses — is wonderful therapy for symptoms but has nothing to do with causation of the illness,” says Esselstyn.

“I really feel we are on the cusp of a seismic change in health,” he says. “We just hope we can get the word out there.” He and Campbell are taking their show on the road with appearances including next month’s Vegetarian Summerfest.

Forks Over Knives makes a pretty good case for how a plant-based diet can save your life. But how does it play as a movie? Film critic Roger Ebert, whose struggle with cancer has left him unable to eat, drink or talk, gives it a heart-wrenching, life-altering thumbs up. 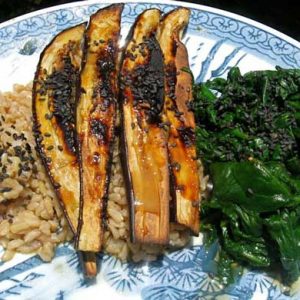