Sorghum — An Ancient Grain Gets Some Modern Love

It’s Black History Month, so to start, here’s a celebration of just a few of the many of African foods that make our lives delicious.

This Sunday it’s a double party. It’s Father’s Day and it’s Juneteenth, Africa American Emancipation Day, commemorating the end of slavery. What to serve at this celebration? Sorghum. Don’t know about it? A gift from Africa, this gluten-free ancient grain goes back millennia and was introduced to America over three centuries ago. It’s been a southern staple crop, for years, it’s the Whole Grains Council’s whole grain of the month, but the rest of us are just catching on to what it can do — everything. Like Juneteenth itself (not to mention your dad), sorghum deserves some love.

The problem is, it’s got some branding issues. We call it sorghum, but we also call it milo. We call it a whole grain but it’s really a grass, like quinoa. Whatever you call it, sorghum’s impressive and versatile. The tiny round kernels cook up slightly chewy — they look and perform like couscous. You can sauce them up and they never get soggy. Or you can pop them like popcorn. Sorghum flour’s a player in most gluten-free flour blends for gloriously gluten-free breads and pastries.* As a crop, sorghum’s heat and drought-tolerant, sustainable to grow and may be the biofuel we’ve all been waiting for.

Nutrient-dense with a naturally high sugar content, sorghum first made its way into American kitchens as a syrup and — even more confusing — sometimes went by the name of sorghum molasses. Edna Lewis, the granddaughter of a freed slave and an American culinary legend secured sorghum molasses’s place in America’s culinary pantheon in her award-winning book, The Taste of Country Cooking: 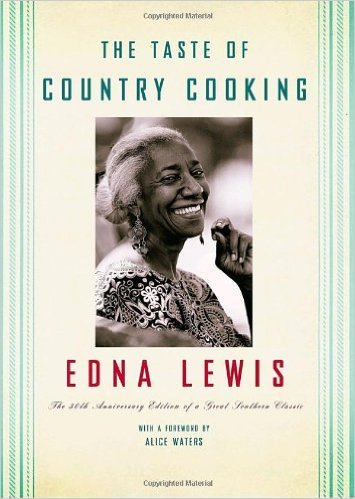 Sorghum is a plant that looks very much like corn, with the exception of the grain which is formed in the tassel. … Most farmers grew a small patch of sorghum. It was harvested in the fall, tassel and leaves removed. The cane was put into a mill driven by two horses moving in a circle, clockwise, pressing out the juice as they walked around. When it was all pressed out it was poured into a large vat and cooked to a heavy, sugary syrup known as sorghum molasses. The aroma of the new crop filled the kitchen. There would be sorghum molasses for breakfast and gingerbread galore until the novelty wore off.

Sorghum doesn’t just look like corn, it does everything corn does but cheaper and more sustainably. Show this ancient grain some modern love, and Juneteenth is the time to start. Juneteenth, by the way, is also a sprawling manuscript by Invisible Man author Ralph Ellison who died in 1994 before he could complete it.

In Juneteenth, Ellison, like Lewis, the grandchild of slaves, eerily predicts and articulates all the race issues we have today. “HOW THE HELL DO YOU GET LOVE INTO POLITICS OR COMPASSION INTO HISTORY?” asks an anguished character.

Start with what connects us, like sorghum. This simple whole food from Africa has nothing spare or impoverished about it. It’s a feast of riches, a celebration of what we can become. Happy Father’s Day. Happy Juneteenth. Serve up the sorghum. 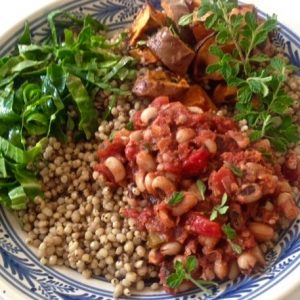 Indigenous to Africa and immortalized beloved by America, sorghum, sweet potato, black-eyed peas, collards and peanuts come together in one bowl. The good news — all components can be made a day or two ahead, then kept covered and refrigerated. Assemble when you’re ready. The other news —now’s the time I break it to you that sorghum is a slow-cooking grain. It needs an hour’s worth of simmering for best results. Leave it alone to simmer while you roast the sweet potato, toss the collards and make the black-eyed pea stew and you’ll have everything ready to eat at the same time — nutrient-dense, rainbow-bright and flavor-packed. It’s like Juneteenth in a bowl. Thanks to Wondergrain, who supplied the sorghum and sorghum syrup for this recipe.
Print Recipe Pin Recipe

For the sweet potato:

*Sorghum flour by itself is heavy. It needs to be lightened with corn starch or potato starch and balanced with other flours for best baking results. Some recipes also call for binders like xanthan or guar gum.