You are here: Home / MAIN COURSE / Iftar Quinoa With Olives, Dates and Dukkah
Across the Middle East, Iftar, the Ramadan break fast after sunset, often features olives and dates, two natural restoratives. In this Iftar Quinoa, olives and dates come together with quinoa for a filling salad topped with a dusting of dukkah, a heady, heavenly blend of nuts, seeds and spices. 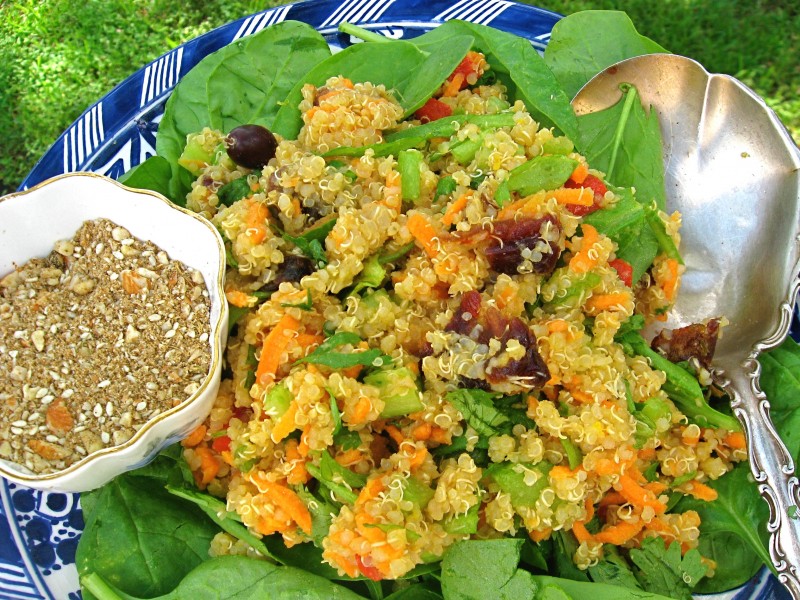 Ramadan begins Saturday at sundown, and we need it. I already wished my next door neighbors a heartfelt, but no doubt, badly pronounced Ramadan Mubarak — blessed Ramadan. They are Muslim, from, well, it doesn’t matter what country they’re from. Muslims make up an estimated 20 percent of the world’s population and they live everywhere, from Mariupol to Miami. My neighbors have been living here longer than I have. We are different, but we live next to each other. As the patriarch said to us the day my husband and I moved in, “We are like family.”
We are like family. Click To Tweet 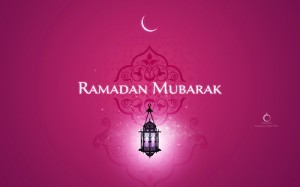 We may be an odd family, but honey, what family isn’t? We have different schedules, different demands, different priorities. That’s okay — with family, you don’t have to be crazy about each other or in each other’s business every minute. You just have to respect each other.

I’m not Muslim but I’ve always thought Ramadan was pretty cool. It’s thirty days of fasting and prayer from dawn to dusk, a time of returning to yourself and your family, a time to pledge your faith anew.

One of the core precepts of Islam is forgiveness. That’s a tough one. Our society is riven — rich and poor, black and white, Muslims and Christians, Palestinians and Israelis, Kurds, Shia, Sunni, North Koreans and South Koreans, Republicans and Democrats, and the ever-divisive herbivores and omnivores. We’ve been fighting over religion and race and our side versus the other side for all of recorded history. And we still haven’t figured out it doesn’t work.

We are a multiplicity of races, religions and beliefs. So to say each nation must live as one people with one ethos, well, that’s repression, isn’t it? On top of which, it’s like wishing for the return of 8-track tapes. Not gonna happen. Muslims and agnostics can and do live within a stone’s throw of each other. The question is, how to do it without throwing stones.

Ramadan takes its name from al-ramad — intense heat. It happens during the hottest month of the year, and with increased population and climate change, it’s only getting hotter. We are all vying for the same limited natural resources. We continue to tax them. Rather than trying to ship anyone who doesn’t think the same way we do to another country, we’re going to have to think — and eat — differently. Study after study has shown a less meat- intensive diet means more land, more food, more water for all of us. Just tweaking what we eat has huge consequences. For the first time ever, the preliminary draft of the new USDA Dietary Guidelines links reduced meat consumption to a more sustainable planet.

Call me crazy. Call me worse. But the fact is, diverse as we all are, we still have to live together. And since we do, it helps to come at it from the point of view of compassion (a big vegan concept) and forgiveness (a big Muslim concept). And a little less meat would be a good thing, too. 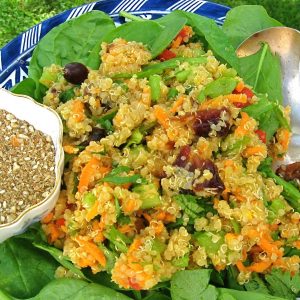 Across the Middle East, Iftar, the Ramadan break fast after sunset, often features olives and dates, two natural restoratives. Here, olives and dates come together with quinoa. Bulgar or couscous might be the more traditional choice, but quinoa, originally from South America, gives you that little extra boost of protein and is so easy to make. Besides, we’re multicultural, babe, get used to it.This main course salad gives you a little salt from the olives, a little sweet from the dates, a lot of nourishment from the quinoa and vegetables, plus a dusting of dukkah, a heady, heavenly blend of nuts, seeds and spices.Another great way to dukkah — dip flatbread in olive oil, then in a shallow plate of dukkah.
Print Recipe Pin Recipe
Course Main Course

« Cabbage and Caraway, Ukraine and Ireland, You and Me | Sunflower Slaw
Olives, Oranges and Food for Thought | Jamie Schler »