“The way I work, I’m all in,” says Miyoko Schinner and let us say hallelujah.  Dubbed a vegan revolutionary by UN Women, Miyoko is the author of four cookbooks including her most recent, The Homemade Vegan Pantry.  She her husband Michael founded Rancho Compasión animal sanctuary.  You probably know, though, her as the force of nature behind Miyoko’s vegan cheese.

Born in Japan, where dairy is much less a thing, Miyoko moved to America with her family when she was seven.  Here, dairy is a thing.  So is processed food.  “TV dinners and American cheese — I loved that stuff.”  Then she moved on.  Backpacking around Europe turned her on to artisanal cheeses like runny Brie and sharp, aged Swiss.  She gave it all up when she became vegan but never lost her passion for food that’s handcrafted, not mass-produced.   Pre-Miyoko, that’s what commercial vegan cheese was.  This did not please her.

Miyoko began experimenting with vegan cheese at home, culturing it like dairy cheese, minus the dairy.  “I took a cheesemaking course. I wanted to know how is this done.  I wanted to know the science behind it,” she says. “I was the only person in class who didn’t eat the product we made.”

From DIY small-batch vegan cheese in her own kitchen, Miyoko launched her own company in 2014.  She now oversees 100 employees and a 30,000 square foot production space, where they make up to 30,000 units of vegan cheese per day.  Applying true artisanal techniques “on an industrial scale was a huge gamble,” one that seems to have paid off. Miyoko hasn’t just scaled up production, she’s taken vegan cheese to the heights it deserves.  Her products have helped pave the way for what’s forecast to be a $4 billion market.

For all that, Miyoko, whom I’ve known since before she built her empire, still believes in keeping it real.  “I’m interested in making real food. I’m not interested in a product,” she says.

“It’s always best to eat whole foods — lentil, potatoes, kale, they’re healthier than any cheese, period.  But people want to eat what they want to eat, so let’s try to make cheese as least harmful as possible.”

Miyoko’s vegan cheese is made from cashews, not cows or chemicals. “We use whole foods and add cultures to it.  The cultures are what develop the flavor,” she says.  “There’s natural fermentation, brining and aging.  That’s why our cheeses don’t have that chemical flavor.”

It can even be used to make the Italian classic cacio e pepe, pasta with Pecorino and pepper. Cacio e pepe is one of those greater-than-the-sum-of-its parts dishes, so simple, so satisfying — and so diabolically easy to go wrong.  It won’t go wrong here. Give it a try.  Because as happy as Miyoko is when you enjoy her cheese, she — and I — still believe the home kitchen is where the magic happens. That’s why she wrote The Homemade Vegan Pantry.  “I want people to learn how to cook for the same reasons one might go meatless — to reduce waste, to be as sustainable as possible.  And the food tastes better,” she says.  “My biggest goal in life is to empower people to don an apron and not be afraid in the kitchen.”

So get ready, world.  Because Miyoko Schinner is all in. 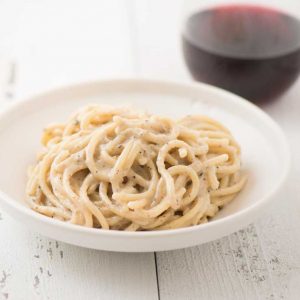 All roads lead to Rome, and what you'll find there is cacio e pepe, the luxurious Roman version of mac and cheese. So save the airfare -- our adaptation, made with our Rustic Alpine Vegan Cheese Wheel, will transport you to a trattoria by the Trevi Fountain in no time.
Print Recipe Pin Recipe

The key thing to remember is not to drain the pasta! The pasta water is what is used to make the sauce, so read the directions carefully before proceeding.