You are here: Home / MAIN COURSE / The (Spaghetti) Wrestler 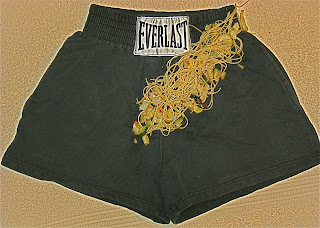 You are, no doubt, more worldly than I and already know this sport of sorts involves inflating a kiddie pool, filling it with pasta, sauce and two wrestlers dressed in provocative undergarments. They then wrestle and tumble amongst the pasta. Mirth ensues.

I found out about spaghetti wrestling not at a city biker bar (though bikers are big fans), but at a local fair in upstate New York where it’s billed as your basic family entertainment.

I went cross-eyed with wonder over issues including:

A pound of spaghetti amply serves four. Kiddie pools range from a capacity of 100 to 200 gallons. So how many pounds of spaghetti does it take to fill it? The answer? Until it’s full.

The spaghetti and sauce are not hot. This is done more for the sake of preventing plastic pool melt and leakage than protecting the wrestlers from burns.

The preferred kind of sauce varies from your classic marinara to Wesson oil, which seems lazy. If you’re going to grind fistfuls of spaghetti into someone, you might as well go the distance, so to speak, with a true sauce.

When I asked which made for the better performance, whole grain spaghetti or the standard semolina pasta, people stepped away from me. Asking whether spaghetti had the edge over linguini or fettuccini seemed out of the question.

Forget kink, it’s an egregious waste of food that could feed the hungry. This is the sort of high-minded thinking that makes one unpopular at parties.

No spaghetti was hurt — or wasted — in the production of the above image. Photography occurred post-meal and involved a handful of leftovers. Recipe below. 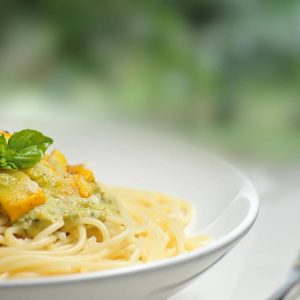