You are here: Home / LIGHT MEALS / The Beet Goes On (Gingered Beets and Beet Greens)

By Ellen Kanner
A version of this post originally ran on March 11, 2011. For Huffington Post’s Meatless Monday

Some people believe in abundance, that the universe will provide. Others believe in scarcity, that there’s not enough to go around. I seem to be bi. I am dazzled by the benevolence and bounty in nature. On the other hand, I read the headlines.

Ukraine and Syria have all grabbed our attention lately, but buried in the news is something you’ve probably figured out in your own —higher food prices. Even potatoes, that basic thrift food, cost more now, and beef is just shy of inflation prices, according to the USDA. Staples like wheat, coffee, rice and soy beans — are in short supply all over the world. So we’re all paying more for less.

Every global calamity (Fukujima, anyone?) threatens our food security even further. And political unrest and soaring food prices go together like mac and cheese. Not only has economic hardship played a role in Syria and Ukraine, some historians believe it was the real tipping point in the French Revolution. Even cheap eats like bread had become prohibitive.

So-called cheap food isn’t cheap now, either, with McDonalds raising its prices. Of all the reasons to go meatless, compassion and the environment top the list. But forget ethics (if you can) — decision-making often begins with your wallet. Since beef is expensive and they’re going to boost the price of a burger, anyway, now’s a nice time to explore other options.

With all the hype about greening your life, one of the most basic things you can do happens to be the most important — going for a more plant-based diet. According to a Stanford University study, two-thirds of our agricultural land goes toward raising livestock, while less than ten percent goes into feeding us. And we’re hungry.

Over two centuries ago, that happy guy Thomas Malthus wrote,”The number of mouths to be fed will have no limit; but the food that is to supply them cannot keep pace with the demand for it.” He predicted “famine, distress, havoc and dismay. . . hatred, violence, war and bloodshed.” Clearly, a textbook case of a scarcity believer.

He thought the situation was hopeless. I don’t. I wish I believed in universal abundance. I do believe we’re capable of change, even if it takes something as dire as a global food shortage to make us act. Giving up eating isn’t viable. Eating smarter is. It doesn’t mean stockpiling food like a survivalist, just making the most of what we have and enjoying more meatless meals. Starting now.

Now happens to have a lot going for it. We’re coming into spring, a happy, hopeful time augering new beginnings. My own vegetable garden is closer to a kiddie pool than an acre and isn’t big enough to put a goat on, let alone feed one. However, it’s putting out an abundance (there’s that word again) of arugula, kale, peppers, tomatoes, radishes, mint and thyme with almost no effort from me.

So indulge in spring’s sparkling produce — grow it if you can, eat it while it’s in season. It won’t get any cheaper and it won’t be here forever. You can’t afford to waste. Really. 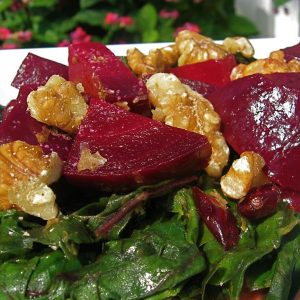 The Beet Goes On (Gingered Beets and Beet Greens)

Vibrant spring greens and sweet roasted beets taste of the moment and make the most of the entire beet from roots to leafy greens. Since Monsanto scored again with genetically modified beets, organic beets are definitely the way to go here. Nice by itself for a lightish lunch or pair with a whole grain for a main course.
Print Recipe Pin Recipe
Servings 6