Sustainable Is The New Normal

When white boil-in-bag rice was the hot commodity, “we had brown rice,” says Jessica Lundberg. “I thought everyone ate brown rice. I grew up thinking healthy eating was normal.” Seems like the family’s always had its own idea of what normal is, starting with Lundberg’s grandparents.

Sustainability wasn’t a buzzword when Albert and Frances Lundberg began farming, but they understood what it meant. “My grandparents felt very strongly about leaving the land better than how you found it. They wanted to take care of it,” says Lundberg of Lundberg Family Farms. “My family came from Nebraska in the ‘30s. They lived through the Dustbowl. They saw what happened when you don’t take care of the land.”

After drought and the harsh farming methods of the day destroyed the family’s Nebraska farm, her grandparents moved to California in 1937 and started over. New home, new crop, but the same attitude. “My grandfather felt the soil was alive, that we needed to feed it, to consider it for generations, not a year at a time.”

As a girl, Lundberg, “was down at the farm a lot. A lot of my experience growing up was eating brown rice, whole grains, fresh vegetables.” It was only later she realized just how rare her childhood was. “People have lost touch how we interact with our environment,” says Lundberg, the farm’s nursery manager and CEO. “But the choices you make have an impact on people’s lives and an impact on the environment.”

Lundberg’s grandfather, her father and three uncles made the choice to grow organic rice. It wasn’t normal in the 1950s, in fact, it was pretty rad, but after the family used an experimental insecticide that killed “everything — not just the insects, but the crayfish, whatever fish were in the water,” normal didn’t look too appealing.

The company has grown since Albert and Frances’ sons traveled by truck, selling organic brown rice to local stores and co-ops, but the core values haven’t changed. At a time when dying family farms are normal, Lundberg, her brother, sister and cousins “have been given quite a gift. We want to continue that legacy.”

The third generation of Lundbergs is “committed to organics and non-GMO [genetic modification]. Genetic modification is done to encourage chemical use. Ninety percent has an herbicide or insecticidal variety. It doesn’t encourage diversity,” says Lundberg, whose family farm grows 17 different varieties of rice. “And we don’t believe it has been shown it’s safe.”

They’re continuing the family legacy by being part of the Food Trade Sustainability Leadership Association , they’re doing it by the way they grow their crops. It’s harvest time, and the family’s been cutting rice from their own fields, coordinating with the 30 growers they work with, then “drying it down to maintain quality.”

Once the rice is harvested, the crop leavings — the straw — is worked back into the soil to nourish it. “It’s like composting,” says Lundberg, who oversees the farm’s organic program. And it can cost up to ten time more per acre than burning the straw — that’s commercial farming’s normal way.

There are cheaper ways to grow rice. And there is cheaper rice. But as Lundberg says, we all make choices. The family is happy growing rice without chemicals or genetic modification, with being committed to protecting our resources by way of sustainable farming and committed to the farmers they work with by way of paying fair wages.

“I want to do it. I feel a connection to the environment and it makes me happy,” says Lundberg. Maybe it’s not normal. But it should be. 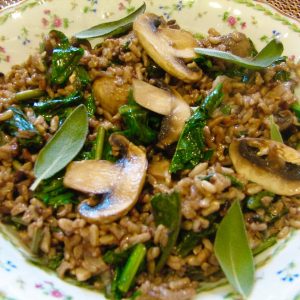 The classic rice dish is really just a matter of timing and technique. Once you get a sense of how to do it, you can trade up mushrooms for almost any seasonal vegetable. Risotto does take time as you stand stirring at the stove. Having friends in the kitchen and/or a glass of wine makes the time go faster.
Print Recipe Pin Recipe