You are here: Home / BREAD / Vegan Cat Head Biscuits with Spinach and Mushroom Gravy (and no Cats)

Cat head biscuits are a southern staple. They are tall, fluffy and traditionally made with lard–but you won’t find lard in my Vegan Cat Head Biscuits. Instead, we are using chilled vegan butter, and you won’t believe the light and flaky texture. Instead of traditional sausage gravy, I’ve added a plant-based spinach and mushroom gravy. Enjoy this Vegan Cat Head Biscuits and Gravy recipe for breakfast or dinner. I promise you won’t miss the pork. 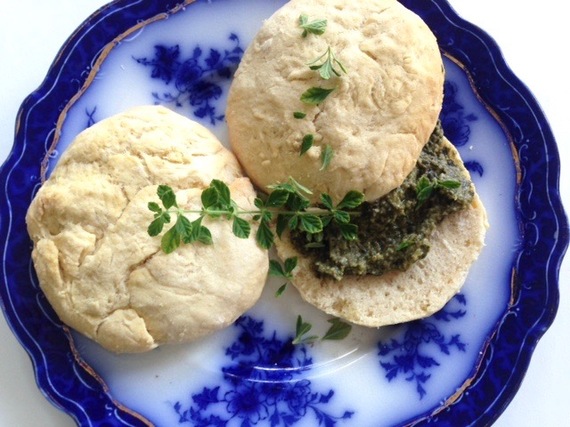 A couple of times a year, I like to swap my stilettos for a pair of hiking boots and lose myself in nature. To celebrate the centennial anniversary of the National Park system in 1996, my husband and I spent a week of hiking in the Smoky Mountains. Home to elk, deer, wild turkeys, Canada geese, rabbits, and black bear, this temperate rain forest has thin topsoil, but the ground is so saturated with moisture, it’s spongy beneath your feet. The rocks and trees are furred with bright green algae. Skinny pines, some up to 200 feet high, tower overhead, their few upper branches taking in the nourishment of the sun. It feels lush, dense, rich, primeval. Yet much of it was homestead and farmland until the park system took it over in the 1930s, less than a century ago. The lesson here — nature can reclaim and heal. But you have to give it a chance.

The same century has wrought changes in us that are not natural, not healing. The Smoky Mountains are rich, full-flavored, nutrient-dense, local produce — every region in our country is. Yet what people flock to are chicken-fried steak and country ham at breakfast, barbecue at lunch and dinner, and fudge, ice cream and pancakes in between. This meat-heavy diet of largely processed food has had very large results. Us. I saw far too many people, both locals and tourists, carrying 50 to 150 pounds of extra weight. This goes far beyond enjoying a vacation treat or two. This kind of obesity adds up to poor health and soaring health costs — up to $200 billion each year. 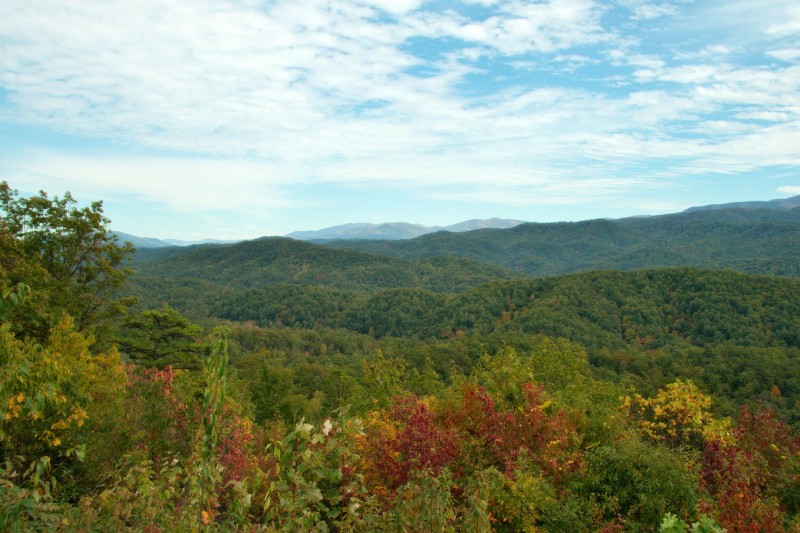 My blogs seldom focus on the connection between a plant-based diet and health because I assume the message is already out there. Even the government is coming around to encouraging a diet of nutrient-dense plant-based foods. But clearly, it’s a message not everyone has received.

Does a meatless diet sound scary? Restrictive? The alternative — a life sentence of diabetes, cancer and heart disease — sounds worse.

Forget healing and nutrient-dense — a plant-based diet can be downright indulgent. Along the river trail one day, I spotted small mushrooms popping out from the green forest floor — apricot-colored with broad, flat caps with frilly edges — chanterelles, aka Tennessee truffles.* With their nutty, umami flavor, and meaty texture, chanterelles are in no way austere —they’re a rare seasonal feast. I also spotted two of my favorite greens— astringent dandelion and lemony sorrel — growing wild. Were it not for a very few vegan-friendly dining options (thanks especially to Wild Plum Tea Room), I was ready to start foraging for food the way mountain locals have done for generations.

Nature can heal us, too. It won’t take a century. It will take moving away from an animal-rich, processed diet and enjoying what a more plant-based diet offers — big flavors, big health. “There’s more to life than meat and potatoes,” as one of the Smoky Mountain guidebooks put it. Start today, Meatless Monday. Let the healing begin. Naturally.

Throughout the Smokey Mountains, it’s not uncommon to find cat head biscuits and gravy on the menu in nearly every restaurant. Of course, you won’t find any pork-laden recipes here, so I’ve put together this recipe of Vegan Cat Head Biscuits and  Spinach and Mushroom Gravy. 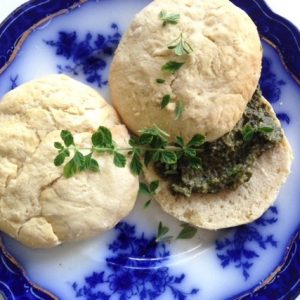 Cat heads biscuits are big (cat-head-sized, if you’re into hyperbole). Beloved in the south, they’re tall, fluffy, and alas, traditionally made with lard. This vegan version may upset southern traditionalists, but their slight but pleasing tang and light texture honors the original without pork fat or harm to pig. No traditional milk-and-pork-fat gravy.
Print Recipe Pin Recipe

For the spinach and mushroom gravy:

For the spinach and mushroom gravy:

For the biscuits:— Use a light hand with the dough. Even better, use a food processor. The whole batch comes together in minutes.— Chilled vegan butter. It keeps the dough cool so the fat melts into the biscuit dough only during baking.— Many southern cooks swear by White Lily flour, a soft wheat flour. I’ve adjusted by adding corn starch to unbleached all-purpose flour for lighter biscuits. — Biscuits always taste best fresh out of the oven.