There’s something new inside fast food franchises — vegans. Chains, which had once been a no-vegan zone — are offering plant-based options and incentives.

In one of the newest victories, select DC-area Subways are offering vegan-friendly sandwiches, an effort spearheaded by animal-rights orgs Compassion Over Killing and the Humane League.

This isn’t a pathetic attempt to placate the vegan mob by fobbing us off with lackluster lettuce, it’s food you’d actually want to eat, whatever your diet. “They’ve been so popular, some stores have sold out within a few days,” says Erica Meier, Compassion Over Killing’s executive director.

When hanging with his meatless peeps, omnivore Hans Hess noted, “Vegetarians could, at times, be treated as second class citizens.” CEO and founder of Elevation Burger, Hess didn’t put a chicken sandwich on the franchise’s limited menu but included not one but two meatless burgers, one vegetarian with cheese and one totally vegan. “Elevation Burger keeps the needs of the people in mind, and happily produces food that is better for you and all-inclusive.”

Very nice, but for the most part, fast food franchises do not act out of love. They do it to accommodate consumer demand. They do it because it’s good business to give the people what they want. We’re here, we’re meatless, get used to it and if you want our money and market share, feed us.

Yearning for a vegan-friendly Subway stop closer to your home? COK’s Meier says, “We’re hoping with enough positive feedback from consumers via our campaign website, the company will decide to offer vegan options nationwide.”

Fast food, even meatless fast food, is still processed. Frankly, I wish we all could prepare home-cooked meals from whole foods and enjoy them together. I wish for a lot of things, including a peaceful, perfect world where hunger is not an issue, healthy food is an inalienable right and a pound of spinach costs less than a side of fries. Still working on that one.

Would that we could enact social, dietary and personal change with the speed it takes to order and produce a black bean wrap. That kind of evolution takes awareness and time. It’s happening, though. Meatless choices weren’t on franchises’ menus — or radar — a few years ago. Every time you order a meatless meal in what was once a vegan-free zone, you become the change you want to see in the world and on the menu. So pull up a chair, vegan friends, there’s a seat at the fast food table for you. 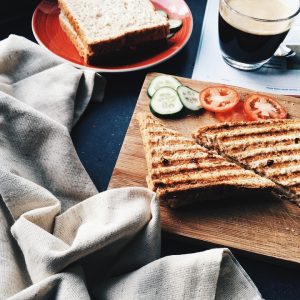 Fast food existed long before fast food franchises. Fattoush is a Middle Eastern bread salad that’s not only fun to say, it’s quick and smart, making use of stale pita. The bread is torn up and tossed with veggies including summer-ripe tomatoes and cooling cuke. It’s bracing to eat, easy to make. Here it’s reconstructed and further simplified, with the vegetables dressed and stuffed in a pita or stacked on slices of whole wheat bread. Takes minutes to make and you can do it yourself. Add a blob of hummus for a beany, proteiny treat.
Print Recipe Pin Recipe