You are here: Home / LIGHT MEALS / My Favorite People, My Favorite Recipes – The Incomparable José Andrés

As you’re reading this, I’m on my way back from Spain, birthplace of the great chef with the great big heart, José Andrés.  No, I haven’t been hanging with José (if only).  In addition to overseeing his 30+ restaurants, Andrés has been busy cooking up some comfort for Puerto Rico’s earthquake victims.

This is not the chef’s first Puerto Rico rodeo. He and his World Central Kitchen team set up a disaster relief kitchen after Hurricane Maria, serving sanchocho to thousands while government agencies and other NGOs were still scrambling to set up services.  He and his nonprofit have since been feeding disaster survivors and first responders all over the world. 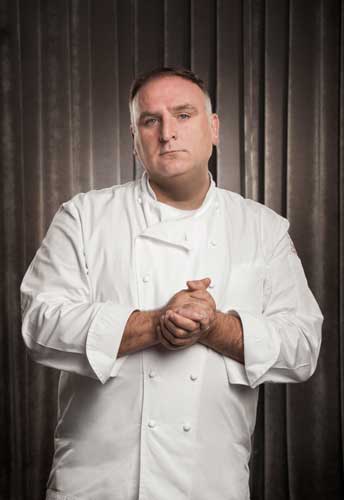 This is the man who came to Miami as the guest of honor at a South Beach Food and Wine event and tore off his chef’s jacket to reveal an I am an Immigrant T-shirt in defiance of Trump anti-immigration policy.  Small wonder the James Beard Foundation named him both Humanitarian of the Year and Outstanding Chef.  Even if he couldn’t boil water, I’d love Andrés for giving both food and voice to those in need.

Andrés knows how to treat people, and while he’ll never forsake jamon, he knows how to treats produce right, too.  “Fruits and vegetables are sexy,” he says, and he gives them their due in his book Vegetables Unleashed. Vegetables aren’t the only ones unleashed. Andrés’ culinary genius is matched only by his exuberance, and both are on full display.  Andrés includes traditional Spanish dishes from his beloved homeland, like escalivada and gazpacho, and others veering far from any culinary tradition — hello, compost potatoes.

Andrés has a gift for seeing the potential in simple ingredients, as well as the potential in people. “We all are Citizens of the World,” he says.  “What’s good for you, must be good for all. If you are lost, share a plate of food with a stranger…you will find who you are.” 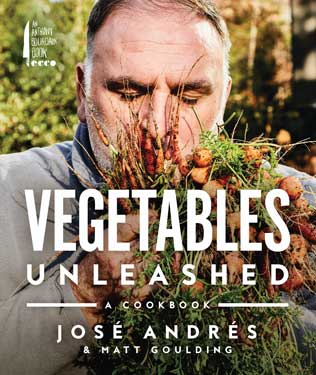 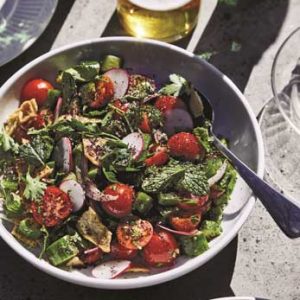 Excerpt from VEGETABLES UNLEASHED by José Andrés and Matt Goulding. Copyright 2019 by José Andrés. Excerpted by permission of Ecco, an imprint of HarperCollins Publishers. You can spot great cooks not by what they do with the best ingredients but by what they do with the scraps. Italian, French, and Spanish cooks all make amazing dishes with old bread; Mexicans do astonishing things with leftover tortillas. In Lebanon and elsewhere in the Middle East there is a whole class of dishes dedicated to using up old flatbread, called fattat. Fattoush is the king of fattat. It hits all the notes I want in a salad: lots of texture, great flavor, and bright clean freshness from the herbs and the pomegranate vinaigrette. That’s probably why it continues to be one of our most popular dishes at Zaytinya. You could use stale pitas, as savvy cooks in Lebanon do, but supermarket pita chips do the trick.
Print Recipe Pin Recipe