The Future of Protein is Plants

The Lunar New Year started on January 25, with Spring Festival celebrations lasting through tomorrow. Welcome to the Year of the Rat. This is actually supposed to be a good thing — the rat is fast-thinking, stable and attracts good fortune. Eating tofu is believed to bring good luck to your entire family, so enjoy it in this plant-based version of the Chinese classic, ma po tofu.

Doug Hines has worked in the protein space (yeah, it’s a thing) for over 40 years. He’s done beef, he’s done Bumble Bee. He’s seen the rise of factory farming, chemical-laced technofood and “genetically modified frankenfish raised in tanks that can grow to 40 pounds in a few months.” It’s standard business practice for many food manufacturers, but not for Hines’ company, Atlantic Natural Foods. Here, they’re all about plants. “We’re looking at garbanzo as the protein of the future,” says Hines, company chairman and partner. “It’s flavorless, the protein content higher, the fiber’s great.”

Atlantic Natural Foods is the largest company in the plant-based protein space — a space with a market forecast to reach $6 billion in the next 5 years. It just makes good business sense. Animal protein, with its toll on natural resources and its crazy carbon output, is expensive. Plant protein costs less to produce than meat, has lower environmental impact. Moving to a plant-forward diet could ultimately free up half America’s cropland now devoted to animal production, reduce our carbon output by half and feed more people.

Plant protein — beans, nuts, quinoa and other whole foods — isn’t new. Neither is Atlantic Natural Foods’ flagship brand, Loma Linda. It’s been producing soy-based meat analogs for 125 years (yes, vegetarians roamed the earth even then), before we even had a term for them. The brand takes its name from America’s only Blue Zone, those global regions where people live longer, fuller, healthier and happier lives. What is new is Loma Linda Blue, introduced this year, plant-based curries and chilis. “They’re a one-minute meal solution not for elite but the mainstream,” says Hines. They’re single-serve, ready-to-eat, shelf-stable, sustainable and with a price point making them as affordable to eat as they are to produce.

Also new is Atlantic Natural Foods’ brand Neat, another plant-based protein line, with products ranging from pancake mixes to Mexican crumbles. Soy-free and gluten-free, these nut and bean-based products were developed by Laura Lapp, who isn’t a food scientist as much as she is a problem solver. In other words, she’s a mom. She created Neat when her two young daughters announced they were going vegetarian. “Starting with dinner that night,” recalls Lapp. “I had a challenge on my hands.”

They wouldn’t eat meat, but being four and seven at the time, they wouldn’t eat vegetables, either. Lapp had to find a way to feed them well “in a kid-friendly form.” Most commercial vegan products “had a long list of unpronounceable ingredients.” She developed products containing a handful of ingredients you already know, like pecans and garbanzos.

Thanks to Atlantic Natural Foods, Neat production is scaled up not only to feed Lapp’s daughters, now 10 and 13 (and big into animal rights), but to consumers everywhere, along with Loma Linda products. The way Hines sees it, plant-based protein is the secret sauce, the thing that lets Atlantic Natural Foods produce flavor, nutrition and pleasure that costs less to produce and to eat, and helps the planet, too. That’s a terrific bottom line. 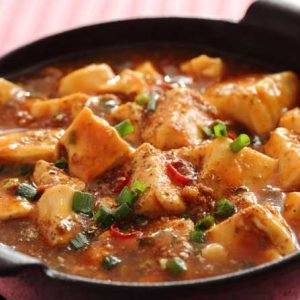 Ma po tofu, tofu swimming in spicy Sichuan sauce, is classic Asian comfort food. Most recipes contain meat and many are fussier to make than need be. Simplicity and flavor combine in this version I gratefully adapted from Asian culinary pioneer Nina Simonds. As Lapp says, “It doesn’t have to be complicated to taste good.”
Print Recipe Pin Recipe