My Favorite People, My Favorite Recipes proudly welcomes Michael Solomonov, winner of this year’s James Beard Award for Outstanding Chef. At the Miami opening of Dizengoff, despite exhaustion, he shared his famous hummus recipe and why he’s so passionate about Israeli cuisine (which, btw, honey, is about sooooo much more than hummus). 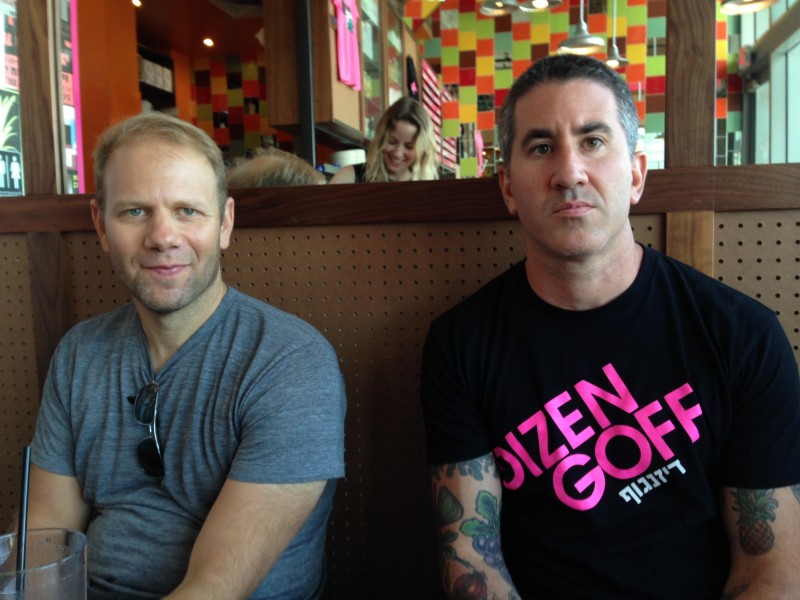 If a tub of supermarket hummus is your baseline, Michael Solomonov, James Beard Foundation’s 2017 Outstanding Chef wants a word with you. “Um, that’s not hummus,” he says, face pinched with pity. Or horror.

The Wynwood outpost of Philly fave Federal Donuts deliciously delivers Solomonov’s give-the-people-what-they-want winning concept of fried chicken and donuts. With Dizengoff just next door, he and restauranteur partner Steve Cook give you what you didn’t even know you wanted but do — desperately — real hummus and heart Israeli-style.

Dizengoff hummus is a game-changer not because it’s made with black beans or red pepper or — God help us — chocolate, but because it’s made traditionally, with creamy sesame tahini (or tehina, as they say it across the Middle East), garlic, lemons and (doh) chickpeas. “Hummus means chickpea,” says Cook with the gentle weariness of a teacher trying yet again to get a student to understand. Solomonov even gives you Dizengoff’s iconic recipe, that’s what kind of guy he is.

As easy as Solomonov’s hummus sounds, the purity of ingredients, the bold authenticity of flavors is alchemical. It’s simple, elemental, age-old and yet exciting and vital, a fusion of many cultures, especially in the hands of Solomonov and Cook, advocates of Israeli cuisine. Solomonov serves as guide in the documentary In Search of Israeli Cuisine, but he and director Roger Sherman make sure the food steals the show.

If the cuisine’s cultural nuances and fusion escape your average eater, the food itself has ignited Israeli fever across America, thanks in no small part to Zahav, their Philadelphia restaurant and their book Zahav: A World of Israeli Cooking. Both won awards and both feature Israel’s produce like olives, eggplant, tomatoes and oranges, zesty, classic Mediterranean flavors like zhug and za’atar, primal cooking techniques like fire roasting and fresh salatim — the Israeli equivalent of mezze, an array of vegetable-forward little plates that start— or comprise — a meal. But ask people who’ve dined at Zahav what they love best and it’s the hummus and pita.

So Cook and Solomonov (the partnership goes by CooknSolo, get it?) launched Dizengoff, a hummusiya (hummus shop) like the ones you see in Israel, first in Philadelphia, then in New York, now in Miami.

“Dizengoff is an exciting and vibrant concept that is also deeply rooted in tradition. And to me, this is Miami,” says Solomonov, a graduate of Florida Culinary Academy. “It’s an international city in the same ways as Tel Aviv.  There are a lot of synergies between the Miami culture and Dizengoff that I think will shine.”

He and Cook came for the July opening of Miami Dizengoff, which is named for the Tel Aviv street people flock to with its cool cafes, galleries and wine bars. The Wynwood street Dizengoff and Federal Donuts occupy, however, wasn’t bustling, it was busted up by construction. The two looked glazed with fatigue and shock. But it didn’t stop them from being gracious and candid when we spoke that afternoon And the mess hasn’t stopped people from crowding into the cozy space for the goods. On Sundays, the line is out the door and down the street, rubble be damned.

Tiny space, tiny kitchen, tiny menu, big flavors, Dizengoff is Zahav’s sexy street-smart kid sister. Its casual vibe suits both Solomonov and Cook, who made their names in more formal high-end restaurants. “That instinct to impress never goes away,” though, says Cook. Dizengoff and Federal Donuts challenges them to deliver artisanal and authentic flavors ramped up for a volume market. Jacques Pepin did the same thing, by the way, when he went from Le Pavillion to Howard Johnson’s. And like Pepin, the accolades and awards are nice but don’t get in their way. “The Beard Award doesn’t make the food taste better,” Cook says.

Better-tasting food is what they’re after. “Food is a way to understand a place in a positive way,” says Solomonov. Especially at a time when a resurgence of racism and antisemitism threatens to overshadow not just Israel but America, “food takes us from the political to the personal. “It transforms the story of the people.”

And as I always say, it brings people together. Solomonov beams. “Exactly,” he says. “Everybody eats.” 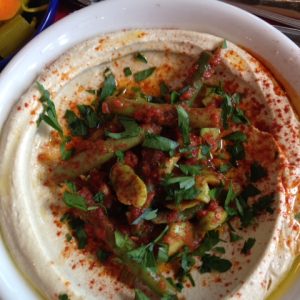 Some of what makes Dizengoff hummus tremendous is technique. Much of it, though, is ingredients. You don’t need to sell me on the creamy quality of dried chickpeas over the canned stuff. And then there’s the secret sauce. Lemon and garlic combine and sit together to temper each other. Add plenty of good quality tehina. Dizengoff uses Soom from the three Sisters Zitelman. So do I. I have become a Soom addict. Dizengoff hummus comes with a variety of seasonal toppings to choose from, including corn masebacha and spring onions with zhug. But my absolute favorite is foul — or ful — beans (what a surprise). I double-checked about the quantity of green beans in the topping. Yes, it’s 16 cups. You’ll be grateful for every last one.
Print Recipe Pin Recipe
Servings 4 -6 people