You are here: Home / MAIN COURSE / The Eating of the Greens | St. Patrick’s Day Wild Greens and Barley

Wild greens are fresh and abundant in the spring. They can add a burst of flavor and brightness to any whole-grain dish. Celebrate St. Patricks Day with a hearty bowl of wild greens and barley. 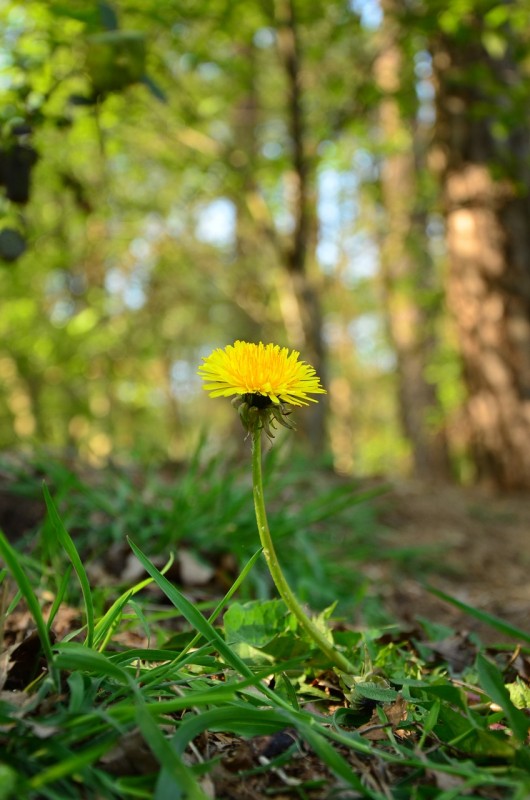 The Eating of the Greens

Wearing green on St. Patrick’s Day brings good luck, they say, but to get the whole Irish experience, eat green, too. Wild greens like dandelion and nettles have been Irish mainstays for centuries. What, did you think the ancient Celts celebrated St. Patrick’s Day with — green beer and Lucky Charms?

Wild greens are just that, wild. We tend to dismiss them as weeds. The thing about weeds is they’re tenacious, an admirable trait, and seeing them as nourishment rather than as a nuisance ups their appeal considerably.

Perhaps the ancient Irish first ate them because they’re abundant, free and handy — local food before we even had a term for it — but it turns out they’re an herbalist’s dream. Dandelion and nettles were crushed and applied as poltices, decocted for wine and tea, administered as a tonic and served up in soups, stews and more. These spring greens are where culinary and curative meet. 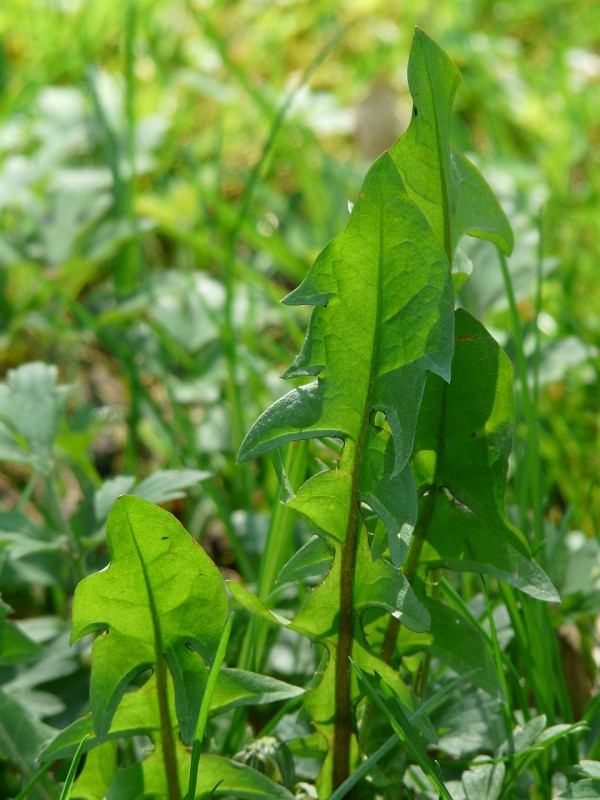 Dandelion greens are dark, spiky and astringent — that’s that bracing, puckery sensation in the mouth. They act as a natural cooling agent. When ancient warriors were burning up with fever from sort of infection, a nasty piercing of the lance, say, dandelion greens would help bring their temperature down. Dandelion greens also act as a diuretic (the French name for dandelion is pisenlit or piss-the-bed), a liver detox and all-around body declutterer. 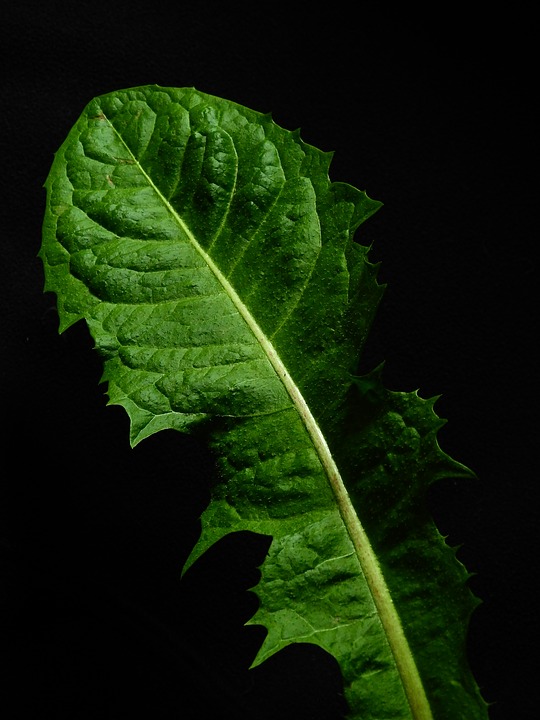 Nettles benefit not only your filtration system but your respiratory system, they keep the lungs and sinuses clean and purify the blood. They’re feng shui for your body. Like dandelion, nettles have a dark and sort of toothy leaf. Grab a handful in the wild and you’ll know why the common nettle also goes by the name stinging nettle. Good news — heat tames nettles.They lose their sting when you cook them.

Both dandelion and nettles predate Master Cleanse. They’re natural detox that grow wild and cost nothing. Both greens are rich in vitamins A, C, boast iron and phytonutrients galore and are available without a prescription.

Being wild, they have a wild taste — vibrant, slightly bitter. You can taste the life in them. Temper the sharpness with a bit of sweetness, like adding slow-cooked caramelized onions or fresh mint — another wild green, believed by the Irish to inspire love.

You can also tame the flavor by employing an old Irish trick — cook the greens with whole grains. Traditional Irish cuisine abounds with savory porridges of oats and greens. It’s brilliant necessity-is-the-mother-of-invention combination of free eats and local crops. Cooked up together, they’re greater than the sum of their parts, a belly-filling meal offering good energy.

If you’re lucky enough to live in a wild place, nettles and dandelions are still around for foraging. Even not-so-wild places. A friend in England bemoans the nettles and dandelions overtaking her garden. I told her to eat them, since I’m not there to do so. I’m happy enough to get the greens in my CSA (community sponsored agriculture) box and to share this recipe below with her — and with you. Dandelions and nettles are local, luscious and seasonal, too, in fields and in markets from through Easter. Try them now, when their leaves are new and at their most tender. 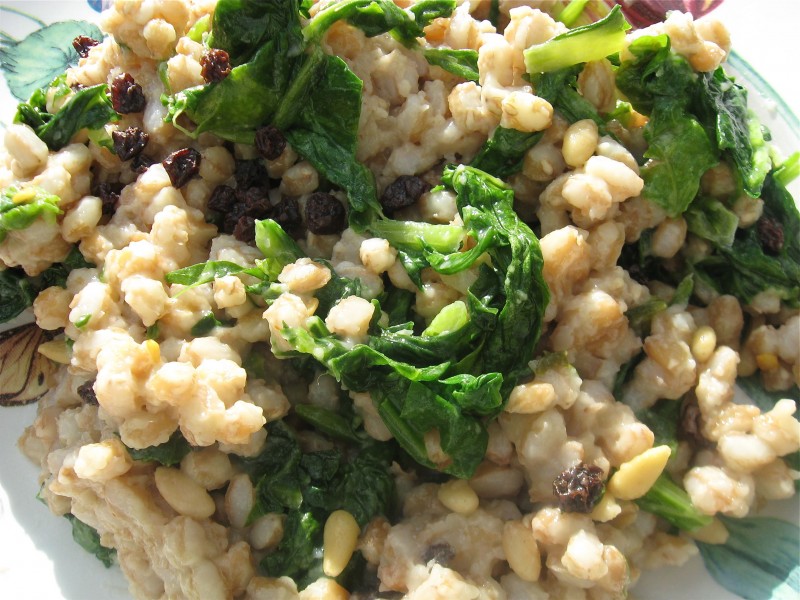 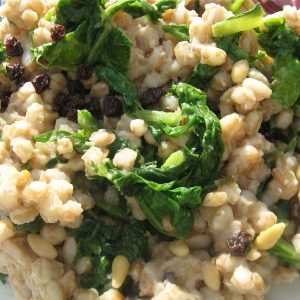 The bright beauty of wild greens shines in this simple spring dish. Barley — another whole grain — stands in for traditional Irish oats. The dandelion or nettles are keepers, though And mint, for love. Like oats, barley benefits by cooking over low heat in a lot of liquid. Using three cups of broth yields a pilaf-like dish, while using four cups will give you something more on the order of a soupier risotto. Serve with a bountiful salad or roasted vegetables, especially earthy roasted mushrooms — foraged spring porcini, if you’re lucky enough.
Print Recipe Pin Recipe

* Leeks are spring-fresh, fabulous, delicate and sweet — but often gritty when you get them. Rinse well. Slice lengthwise, so you have two long strips. Thinly slice the strips crosswise, so you have a bunch of skinny leek half-moons. Fan out the leek slices, so there’s nowhere for the dirt to hide. Add leeks to a large bowl, shake in a fair amount of table salt and cover with lukewarm water. Give it a swish or two. The salt water seems to coax the dirt out of the leeks. Rinse well one last time, to get rid of both salt and grit. Pat dry and proceed in cooking.