You are here: Home / MAIN COURSE / Cowpeas with Za’atar

Once upon a time, there was a boy named Jack. Jack came from a hard-up family, but he considered himself a savvy, enterprising lad. To prove it, he went to the market, worked a deal and ran home to show his mother his newest acquisition. Beans.

What kind of beans? his mother asked.

Magic beans. I got them off a biotech guy.

What did they cost? she said.

Almost nothing. Just the cow.

Somewhere between pissed and heart-broken, Jack’s mother tossed the beans out the window, convinced her idiot son had given away the only thing they had of value.

Meanwhile, the beans, which, being magic and all, grew. They grew a lot, and by morning, had put out a stalk so high Jack and his mother could not see the top of it.

See, I told you they were magic, Jack said.

Yes, but what kind of magic? his mother said.

Jack kissed her forehead and said, Mom, you are so old school. Then he began climbing up the beanstalk. This took all day and most of that night. He reached the top by midnight and came to a magnificent castle so huge he could slither under the door and get inside.

He ran smack into an ogre, or rather, the ogre’s foot. He looked up and up until he could see the ogre’s face. It was not smiling.

You probably know the rest — evil ogre in hot pursuit of Jack, who somehow escapes with the goose that lays the golden eggs.

So, what kind of magic were these beans? It depends on who’s telling the story. A biotech company like Monsanto would boast about the beans’ quick growing time, the fantastic yield — c’mon, golden eggs — painting a happily ever after scenario.

On the other hand, there’s the unintended consequences. These aren’t spoken of much, but Jack the consumer might have been duped, was almost an ogre’s midnight snack, who knows just how happy an ending it really is?

Monsanto, the folks who brought you Roundup and Agent Orange, also produces genetically modified soy and corn. Even if they deliver greater crop yield, enhanced nutrition and all the benefits Monsanto promises, there are still unknowns and unintended consequences in every color but green.

Jack and his mother had a right to know what was in those beans. So do American consumers. Studies indicate genetically modified crops pose risks to the planet, by means of contamination and dangerous loss of biodiversity. They can also pose risks to our health. Haven’t heard much about these studies? Thank Monsanto, which has flooded the market with GMO products while suppressing test findings that might be bad for business. Oh, really? Because the company just posted third-quarter income — it’s up 77 percent .

Eighty-seven percent of Americans would not knowingly consume genetically modified products. But over half of us do, because there is no GMO labeling law. Talk about unintended consequences — we aren’t being told what’s in our food and unknowingly finance a practice we’re opposed to. Meanwhile, Monsanto’s making a killing. Perhaps literally.

Glyphosate, a major player in Monsanto’s Roundup, has been linked to health risks including cancer and infertility. It’s not just killing weeds, it may be killing us, too, and it’s finally gotten the attention of the EPA.

I hope it’s gotten your attention, too. Every new threat to our health creates a greater demand for a food system that’s transparent and accountable, a system we can trust.

Unlike Jack’s magic beans, that won’t happen overnight. Until it does, eat defensively. Pass on processed products, where GMOs tend to lurk. Choose organic food or local food produced by a trustworthy source — including yourself. It’s been a record breaking year for seed-buying and first-time gardeners — over 43,000,000 American households are growing their own food. You can’t eat more locally than food you grow yourself. 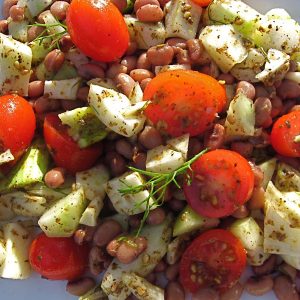