It’s Whole Grains Month and I’m celebrating with this satisfying Middle Eastern barley and herb salad. Barley has a satisfying chew, is high in protein and out-fibers many other whole grains. 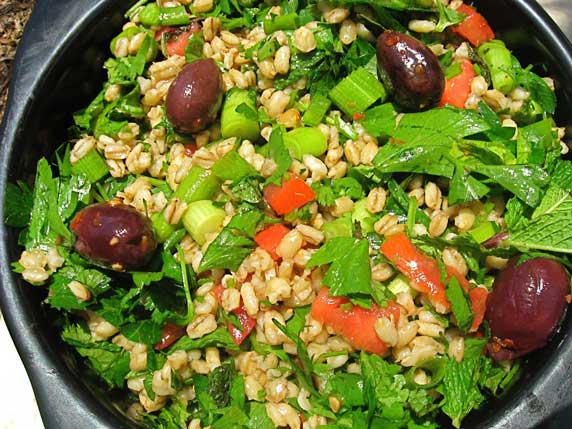 Meatless by the Book

If you want to find justification in the Bible for any sort of behavior, it’s in there. It’s just a matter of interpretation, from when the earth will end to what a supreme being had in mind for us to eat.

In Genesis 1:29, the Word, as Adam and Eve got it, was, “Behold, I have given you every herb bearing seed, which is upon the face of all the earth, and every tree, in which is the fruit of a tree bearing seed, to you it shall be for food.” You can read that and conclude God wants us to be meatless. 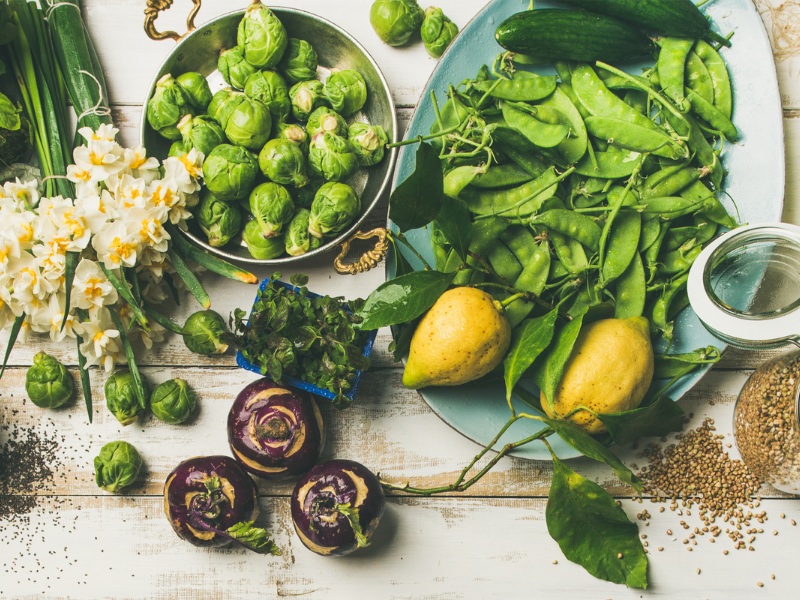 Then you can read Genesis 9:3 in which God tells Noah, “Every moving thing that liveth shall be meat for you, even as the green herb have I given you all things,” and conclude God’s given us the okay for animal.

Or you can reckon, as I do, that Noah was a whiner. That he yammered and yammered and said, But I don’t like seeds and herbs and we’re stuck here in the rain on this stupid boat and I’m hungry. God just gave in and said, all right, already, eat what you like, let it be on your head.

I’m a little skeptical about Peter, who in Acts 10:9-15, hears a voice telling him nothing is forbidden him to eat. Some religious pros believe the voice to be God’s, but we weren’t there, who knows, maybe Peter was just crazed with hunger and suffering auditory hallucinations.

So we go back to Genesis 1:28, the bit where the Lord gave man dominion over all the animals.

Yes, but that doesn’t say we should eat them, too. Dominion is not the same as domination. I prefer to think the interpretation here is, we are custodians of our fellow animals, and since we have this fairly well developed cerebral cortex that puts us in charge, it’s our job to look after them. With compassion, not cruelty. And without making them dinner. 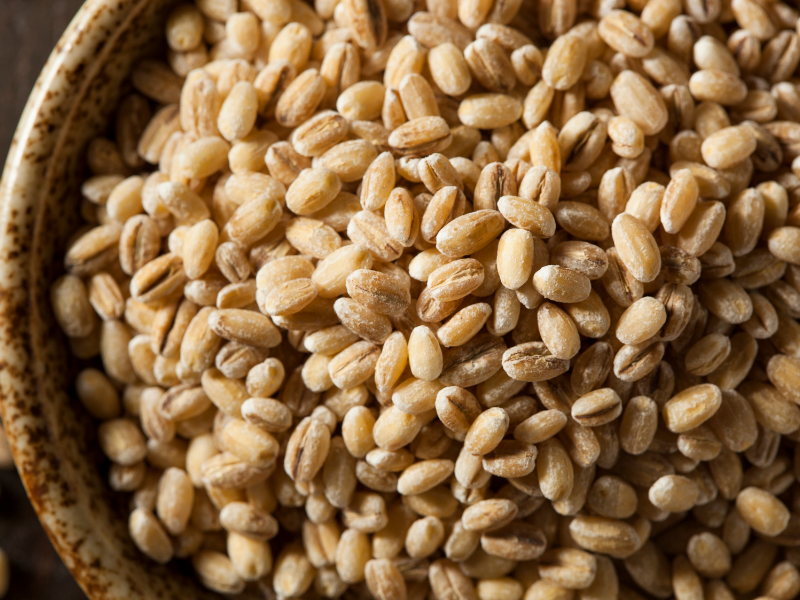 Look, I’m not a Bible scholar. I’m a Sunday school dropout and an agnostic. I think if there is a God, it’s a big-hearted being, despite our quirks and our craziness, able to focus on the big picture, see what we’re doing and basically shrug and say, Oy, what can you do.

God laid down a scant few rules — ten of ‘em. We have a hard enough time following these (some kind of design flaw). How many elected officials alone have skirted or shrugged off three of your basic commandments — thou shalt not lie, thou shalt not steal, thou shalt not commit adultery?

So am I questioning God? No. I’m questioning us. Because while the message might be a little confusing, basically God says we can choose what we eat. The question becomes, what do we choose?

I choose compassion, towards animals of all kinds. Including — though it’s sometimes a struggle — my own kind, the human kind. Which brings me to one of my Biblical faves, Proverbs 15:17 “Better is a dinner of herbs where love is than a fattened ox and hatred with it.”

The way I interpret the Bible is the way I choose to live — with a supersized portion of compassion, hold the meat, hold the side of hatred. And don’t forget the wine — it gets a big Biblical seal of approval, and who are we to argue with that? 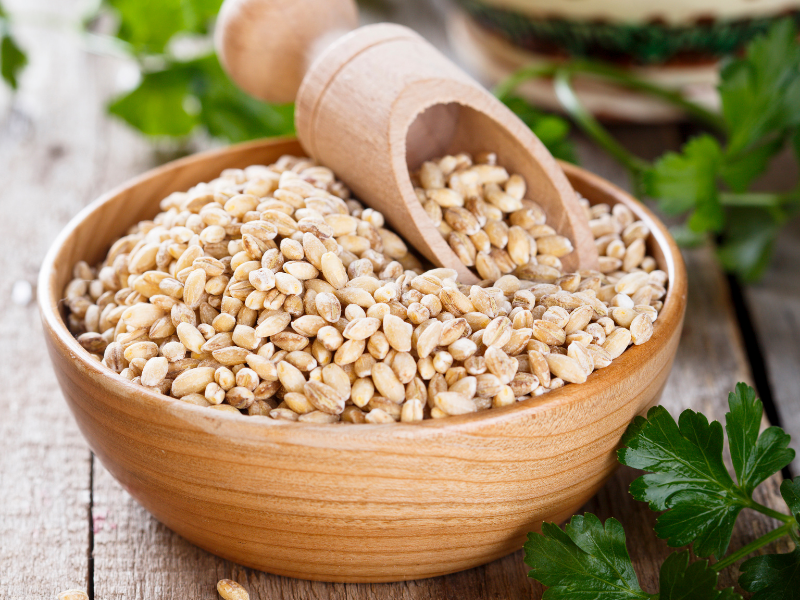 This barley and herb salad has life force and history. Cheap, fortifying, and loaded with fiber, barley feeds 5,000 people in the Book of John and is a hit in the Old Testament too.

These days, most people consider barley — if they consider it at all — as something wintery, perhaps sharing space with mushrooms in a warming bowl of soup. Here, this ancient whole grain gets the tabbouleh treatment, and becomes a significant salad loaded with herbs (and love — see Proverbs above). Nice as part of a biblical meze (Middle Eastern tapas, if you will), served alongside a blob of hummus and flatbread or with roasted eggplant, it’s just right for any season. 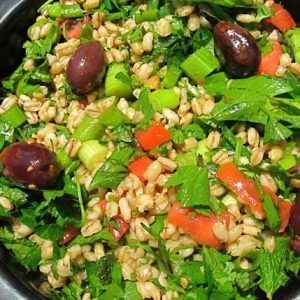 This barley salad has life force and history. Cheap, fortifying, and loaded with fiber, barley feeds 5,000 people in the Book of John and is a hit in the Old Testament too. These days, most people consider barley — if they consider it at all — as something wintery, perhaps sharing space with mushrooms in a warming bowl of soup. Here, this ancient whole grain gets the tabbouleh treatment, and becomes a significant salad loaded with herbs (and love — see Proverbs above). Nice as part of a biblical meze (Middle Eastern tapas, if you will), served alongside a blob of hummus and flatbread or with roasted eggplant, it’s just right for spring. Tahini is an extremely luscious sesame paste, available in Middle Eastern groceries, natural food stores, and most supermarkets. Like natural (preservative-free) peanut butter, tahini tends to separate, with the oil floating to the top of the sesame goodness below. Stir well before using.
Print Recipe Pin Recipe

« Belila – Barley and Dates for a Sweet New Year
What Goes Around Comes Around — How Lentils, Pomegranates and Other Round Foods Can Get You Back in the Holiday Spirit »